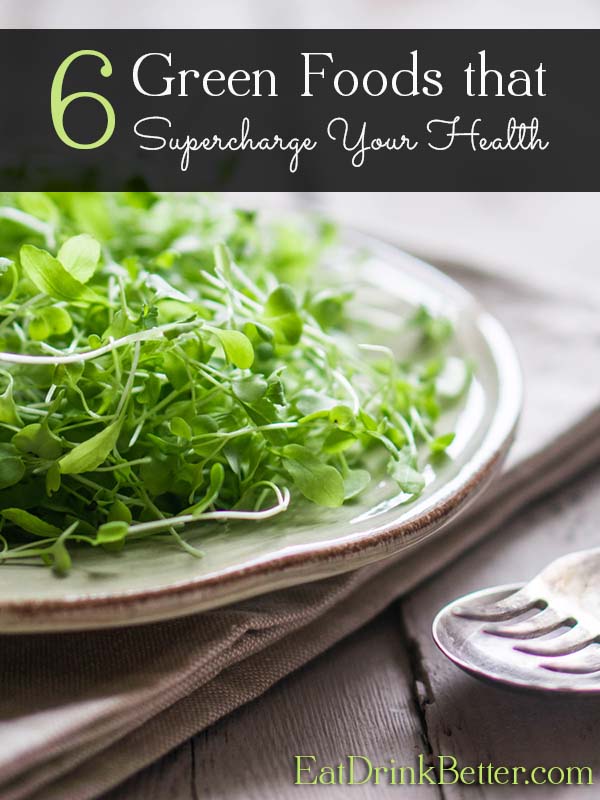 Green foods can be the answer for super health! Green foods are power packed with nutrients—energizing, detoxifying, rebuilding and immune strengthening.

As green foods grow, they provide oxygen for people and the planet. Green foods are rich in chlorophyll, a potent collector of the sun’s energy. Chlorophyll is the green pigment of plants required for photosynthesis. The word is derived from the Greek “chloros” meaning “greenish-yellow” and “phyllon,” meaning “leaf.” Sometimes referred to as “plant blood,” this substance is similar to the hemoglobin of our red blood cells, though rather than containing iron at the cell center, as found in human blood, magnesium is present.

Chlorophyll stimulates red blood cell production and is thus beneficial in treating anemia. It is anti-inflammatory, aids digestion, helps prevent both internal and external infections, minimizes the effects of pollution and helps the body to obtain more oxygen. Chlorophyll doesn’t kill germs, but provides an environment that interferes with their growth.

Before immune suppressing drugs were available, chlorophyll was applied to skin grafts to prolong their survival and acceptance by the body.

In 1943, The American Journal of Surgery claimed chlorophyll sped up wound healing by 24.9 percent. Chlorophyll reduces itching, odor and pain from wounds. Greens help relieve pain, decrease stress and make one more flexible. Greens calm the mind and clean the digestive tract. There is no tolerance level that builds up with repeated use of green foods, unlike many drugs that work initially and then require larger amounts.

Chlorophyll exhibits no toxicity whether ingested, injected or applied topically, making it one of the most unique substances known to science.

Another nutrient present in green foods, though the chlorophyll shades their yellow-orange color, is beta-carotene. In the body, this nutrient is converted into Vitamin A and benefits the eyes, skin, mucous membranes, hair, nails and bones, as well as helping to prevent free radical damage to healthy cells. Green foods also usually indicate the presence of calcium, magnesium and potassium.

1. Currently barley, oat, rye and wheat are grown for their healthful chlorophyll rich grasses. People who are allergic to grains, are usually sensitive to the gluten, not the grasses. Start slowly, and discontinue if you do have an allergic reaction.

2. Alfalfa’s (Medicago sativa) name is derived from the Arabic “al fasfason,” meaning “the best fodder.” This member of the Fabaceae (Pea) Family is the most common source of commercial chlorophyll. It is used as a detoxifier, not only from its chlorophyll content, but also as a source of fiber.

Used therapeutically in treating ulcers, arthritis, and bladder infections, alfalfa has been most recently as an aid in normalizing estrogen production. It is rich in vitamins C, D, B-2, B -6, calcium and potassium. It does contain small amounts of Vitamin K, which helps blood-clotting ability. Nursing mothers find alfalfa increases milk production.

3. Barley Grass (Hordeum vulgare) is a member of the Poaceae (Grass) Family. Derived from the young grass from planted barley grains, the juice produces a pleasant tasting super food. Barley grass is rich in enzymes and antioxidants, including superoxide dismutase, which is being studied for its anti-cancer properties and is showing that it can help slow down the aging process.

Barley grass is also rich in Vitamins C, B-1, B-2, biotin, niacin, calcium, iron, manganese and selenium. It is very alkaline and invigorates the thyroid gland. It is often used to improve skin conditions, aid weight loss, constipation, ulcers and fatigue.

4. Blue Green Algae (Aphanizomenon flos-aquae) is found in fresh water lakes. Upper Klamath Lake in southern Oregon is the only place in the world where large quantities are available in the wild. This plant reproduces at a very fast rate, almost daily in the summer. It is said to contain 65 percent in assimilable protein. Its cell wall is soft; therefore it is easy to digest. It is also rich in neuropeptides, making it an aid to strengthen the brain’s neurotransmitters. People enjoy blue green algae in either powder or tablet form for its energizing properties.

5. Spirulina (Spirulina platensis) is another blue-green algae. It has a spiral shape and is multi celled. It’s rich in protein and was considered a “sacred power plant ” by the Aztecs and Mayans. Spirulina is high in protein and GLA (gamma linoleic acid). Spirulina grows in warm alkaline or salty water.

One acre of spirulina yields 20 times more protein than an acre of soybeans. It is 65 percent protein and does contain some vitamin B12. It is easy to digest due to its soft walled cell structure. Popular with dieters, this super food is so packed with nutrients, including the amino acids phenylalanine and tyrosine, which suppress appetite, and helps one feel satisfied. Try sprinkling the powder into salads, soup, or guacamole.

6. Wheatgrass (Triticum species) is a member of the Poaceae (Grass) Family. Wheatgrass has been used for at least 5,000 years. Chinese, Roman and Greeks all wrote about its healing properties.

Dr. Ann Wigmore repopularized wheatgrass in the 1970’s. This super food is made from the juice of the sprouted wheat berries. Wheatgrass is 95 percent water and in the remaining five percent are a host of nutrients, including beta carotene, B complex (including B12), vitamin C, E, K, U, calcium, cobalt, iron, magnesium germanium, phosphorus, sodium, sulfur, zinc and seventeen amino acids (including the eight essential ones), antioxidants, cobalt and zinc, and at least eighty enzymes.

According to agricultural researcher, Pfeiffer, when dehydrated, wheatgrass has a protein composition of 47.4 percent (three times higher than beef). Wheatgrass has been analyzed to contain 90 out of a possible 102 minerals.

People who drink wheat grass feel energized and clear headed from their daily shots of “grass.” Wheatgrass detoxifies, purifies and builds the blood. Wheatgrass is antibacterial, antiviral and alkalinizing. It helps eliminate mucus from the intestines, provides a sense of well being, nourishes the brain and nervous system, and prevents degenerative disease.

Super green foods can be blended into smoothies and many are also available in capsules.

Remember to include plenty of common green foods in your diet such as dandelion greens, kale and collards, which contain similar nutrients to the above mentioned green foods. A diet that includes a multitude of natural colors is sure to include various vitamins.

For super powered nutrition, make greens high on the list!