Have you ever eaten crema? Crema is the Mexican version of French crème fraîche. Both are a slightly sour and thickened dairy cream but less thick than American dairy sour cream.

It’s typically used as a garnish drizzled over enchiladas, burritos and tacos. I’ve also seen it used as a dip for tortilla chips. I loved it in my pre-vegan days but I’ve never tried making my own vegan version.

Since I’ve never made a crema, I had to do a bit of research on what exactly goes into making it. I found a few vegan crema recipes that used yogurt, some added avocado, and quite a few were made using cashews. If I had cashews on hand I probably would have opted for those as a base. But I didn’t. I didn’t actually have anything on hand that the other recipes called for so I decided to improvise using a box of silken tofu that I found hidden in the back of the fridge. 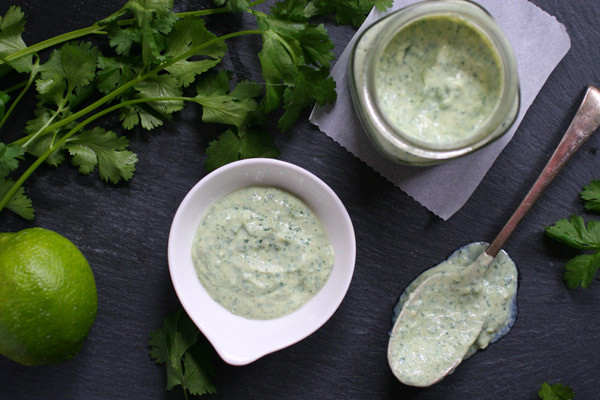 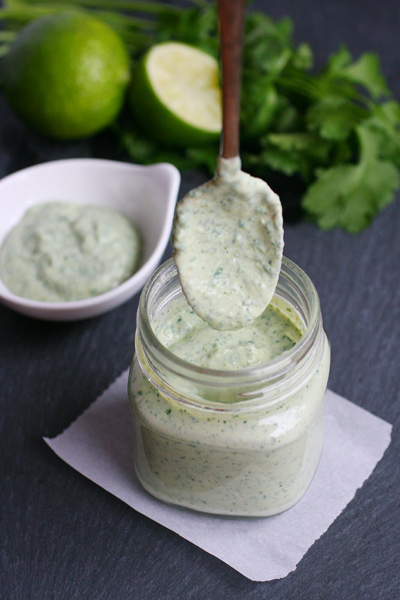 If using cashews, soak 1 1/2 cups of cashews for an hour or so in filtered water. Drain the water. Using a food processor, process them with the lime juice until smooth. Add the rest of the ingredients and puree until fully combined.

I served my crema on top of a baked sweet potato topped with black beans, red onions, and kale but it would go perfect on any dish. Try it on a Mexican-style tofu scramble, a vegan cheese quesadilla, or a bowl of brown rice, tomatoes, seitan, and avocado. Speaking of avocado, why not serve it over a halved avocado stuffed with vegan chorizo? The possibilities are completely endless.

If you have leftovers you can store in an airtight container and it’ll last for a few days in the fridge. This Vegan Cilantro Lime Crema was super tasty, both my wife and I enjoyed it immensely. I think you will too. Let me know how it goes in the comments, or find me on Twitter.

KD Angle-Traegner is an eleven-year vegan and the Founder and Editor for Your Daily Vegan, a vegan lifestyle resource featuring more than fifty how-to guides on vegan living, a library of hundreds of vegan books and movies, a frequently updated vegan Netflix streaming guide, and more. She is also the creator of Sanctuary Spotlight, a blog dedicated to telling the stories from animal sanctuaries that also features a database of animal sanctuaries throughout the United States and internationally, sanctuary wishlists, and a guide on helping animals. KD lives in Ohio with her wife and 9 rescue animals. To learn more, visit her website at http://www.yourdailyvegan.com