In the history of Southern cooking, this Low Country Okra and Tomato Soup recipe goes way, way back. Its essential ingredients, okra and tomatoes, comprise the original combination of crops connecting West Africa and America. This dish simmered away in cast-iron pots over open fires as well as in hearth kitchens indoors, from Williamsburg and Charleston through the Piedmont regions of North Carolina, Georgia, and beyond.

Known and beloved in the Low Country as “okra soup,” it also goes by “okra gumbo” and “stewed okra.” It can be drier or juicier, depending on the proportion of tomatoes, cooked for hours over low and slow coals.

Bacon or fatback is its standard start, but olive oil and garlic make a lovely, vegan version. Start with vine-ripe juicy tomatoes and petite pods of okra in the summertime, but know that a winter version made with canned tomatoes and frozen chopped okra brings wonderful flavor to your cold-weather menu. Cornmeal-based bread is not an official requirement here, but I find the pairing so pleasing that it’s simply a matter of which kind: corn cakes or skillet cornbread? 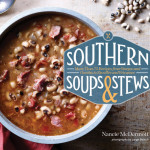 This recipe is adapted from Nancie McDermott’s new cookbook,  Southern Soups & Stews, which opens the window on the traditional cooking in homes, faith communities, down-home cafes, and fund-raising annual gatherings from Virginia and Florida to Arkansas and Louisiana. These recipes serve up soups and stews seasoned with history, offering us a glimpse of how people farmed, cooked, and celebrated life over time.