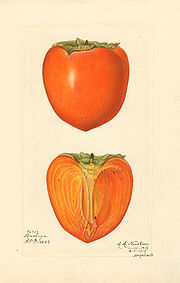 …[the persimmon’s] bitter power of astringency is surprising, and seems capable of suspending for a time all the faculties of the lips, and binds up the risible muscles of the sufferer to the same extent that it excites those of a spectator.

Most Americans aren’t familiar with this delicious but misunderstood tree fruit. Not surprising, since it’s native to China and more prominent in the Far East, Middle East and Western Europe.

You’ll find persimmons in the market right now since they are usually available from late fall through the winter. There are over 500 varieties planted in the United States (originally introduced to California in the mid 1800’s) – each with a slightly different color, texture, shape and astringency. Persimmons can be classified into two general categories: those that bear astringent fruit until they are soft ripe and those that bear nonastringent fruits

That being said, I’m going to concentrate on the two most predominate varieties: The  astringent Hachiya (which makes up 90% of the U.S. plantings) and the nonastringent Fuyu (my favorite and gaining popularity).

Large, oblong-conical fruit with a  glossy, deep orange skin and dark yellow flash. (See the picture above and at the left.) Extremely astringent when non-ripe but are very sweet and rich when fully ripe. Good for drying. Great for pies, steamed puddings, cakes, fillings and ices.

Medium-large oblate fruit, faintly four-sided with a deep orange skin and light orange, sweet and mild flesh. Fuyus can be eaten either unripe and crisp-hard (such as sliced in salads) or fully ripen when sweetly luscious and somewhat messy.

My feeling about persimmons, as with a majority of sustainable grown produce, is to not cover up or obscure their unusual texture and delicate flavor. I know I said they is more to do with persimmons than just pudding but the following recipe is amazing. If steamed pudding doesn’t float your boat, my next post will give you a Fuyu Persimmon and Duck Salad with Hazelnut-Sherry Vinaigrette. Perfect for that Christmas dinner.

In a large bowl, place the persimmon purée and stir in the baking soda. Set aside.

In a bowl of an electric mixer fitted with a paddle, cream the butter and sugar. Add the eggs one by one. Slowly add the lemon juice, rum, flour cinnamon and salt until well blended. Add the persimmon mixture. Fold in the walnuts and raisins.