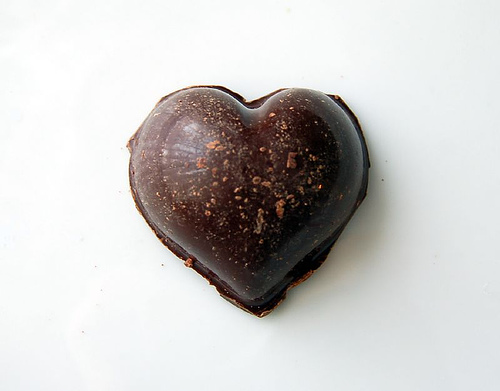 This post brought to you by True Healthy Products. All opinions are 100% mine.

I love dark chocolate, and I’ve heard it’s good for you (or, at least, not bad for you) but I had never really looked into how much nutrition, what kind of nutrition, or what kind of other health benefits it offered. (I just assumed people were telling me the truth and didn’t concern myself too much with the matter — I eat it when I feel like it.) However, today, I have decided to look into the matter (yes, to write this post). After grabbing a little dark chocolate my partner brought me from the Czech Republic recently and sitting down to research the matter, I have to say that what I’ve found is pretty impressive:

First of all, what is in dark chocolate? On the most pure level, dark chocolate ingredients are just: chocolate liquor, cocoa butter, cocoa powder, and some sort of natural sweetener (typically, sugar).

Other minor ingredients may be included and it can still be considered dark chocolate by the FDA, such as “dairy solids, natural or artificial vanilla, and emulsifiers like lecithin.” Overall, not much to worry about there, but I prefer to go for the completely non-dairy options.

What Dark Chocolate’s Main Ingredient, Cocoa, is Good For

So, now that we know what’s in dark chocolate, we can delve into what its root ingredient, cocoa, is good for. First, though, let me go grab another little piece of chocolate to keep my brain functioning well and wake me up a bit :D (it’s after midnight where I am now).

Cocoa is good for the heart. This is something I know my mom, an alternative medicine doctor, has told me many times, but I never asked why, what was behind that. Here’s the scoop:

“Chocolate and cocoa derive their health benefits from flavonoids which are plant pigments capable of acting as antioxidants to counteract some of the cellular damage that can lead to chronic diseases such as cancer and heart disease,” Natural Health Ezine writes. “Cocoa powder has also been shown to lower blood pressure and improve blood flow in humans.”

These nutritional benefits have actually been reported in peer-reviewed, scientific journals like The Journal of the American Medical Association and Nature.

Furthermore, to compare dark chocolate’s benefits to something you are probably more familiar with, I actually read that a cup of cocoa includes 3 times more antioxidants than a cup of green tea.

Cocoa is Good for Your Mood

Phenylethylamine, a component of cocoa, is a mood-elevating substance. Chocolate really does chemically improve your mood! (It’s not just in your head.) Note, however, like with all things, there are benefits and minuses. People more likely to suffer from anxiety or panic attacks can get over-stimulated by phenylethylamine. Additionally, it can be addictive. Hmm, could have fooled me,… but let me go grab another piece real quick.

“Our findings indicate that milk may interfere with the absorption of antioxidants from chocolate … and may therefore negate the potential health benefits that can be derived from eating moderate amounts of dark chocolate,” researcher Mauro Serafini, PhD, of Italy’s National Institute for Food and Nutrition Research in Rome, says.

So, if you want to eat some tasty chocolate and want to get the most health benefits from it, choose some simple, dark chocolate and enjoy.

Can We Classify Chocolate as a Vitamin?

“Prof. Norman Hollenberg MD of Harvard University Medical School is on record as stating epicatechin (in chocolate) should be classified as a vitamin, it is so important to our heath. In fact, he also said the health benefits of epicatechin found in cocoa are so striking, that it may rival penicillin and anaesthesia in terms of importance to public health.” Wow, that’s some pretty strong support for the claim that you need chocolate.

“Hollenberg spent years studying the benefits of cocoa drinking on the Kuna Indians, who live on the San Blas islands off the coast of Panama. He found that the risk of 4 of the 5 most common killer diseases: stroke, heart failure, cancer and diabetes, is reduced to less than 10% in the Kuna (90% reduction!) They can drink up to 40 cups of cocoa a week. Natural cocoa has high levels of epicatechin.”

Furthermore, a UC-Davis study found that Kuna Indians that migrated to the suburbs of Panama and started consuming several times less cocoa didn’t have nearly the cardiovascular health of those who didn’t.

And, lastly, studies have shown that consuming pure epicatechin has the same effect as consuming flavanol-rich cocoa, meaning that this critical component of cocoa, and thus dark chocolate, is highly useful for the human body.

In the end, I’ll quote that Harvard doctor mentioned above on what this could mean:

“If these observations predict the future, then we can say without blushing that they are among the most important observations in the history of medicine,” Hollenberg says. “We all agree that penicillin and anaesthesia are enormously important. But epicatechin could potentially get rid of 4 of the 5 most common diseases in the western world, how important does that make epicatechin?… I would say very important”

Of course, as with all things, eating too much isn’t good. Just because something has health benefits, doesn’t mean you should eat it all day long. Eat your chocolate in moderation. Savor your chocolate and eat .