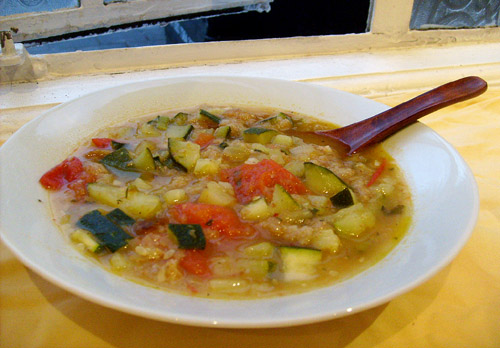 One of my favorite parts of the week is picking up my Growing Communities veg bag from Hackney City Farm. As I’ve written before, a veg bag is the British equivalent of a Community Supported Agriculture (CSA) box, filled with organic and mostly locally grown produce. Following a veggie burger as well as carrot potato pancakes, I’m doing more fun kitchen experiments figuring out how to use all the random vegetables that come my way.  It’s the veg bag game! Can’t beat anything that combines games and food: two of my favorite things on the planet besides panda babies.

Growing communities is nice enough to include a recipe in the bags each week, which I’ve found to be a great starting point for figuring out what to make. It’s amazing how many dishes can be made based on what can often be found in your average kitchen – today I debated a pasta primavera and a stir-fried eggplant with brown rice – but decided to riff off the Courgette and Cheese soup recipe from the bag.  The fun part of the game is playing with ingredients depending on what I’ve got lying around and seeing what deliciousness results. I didn’t have any cheese, but I did have cherry tomatoes and some verging-on-stale whole wheat bread so I tossed them both in for a texture similar to ribollita (a Tuscan soup made with stale bread).  The bread makes it hearty, but it’s got the lightness of a vegetarian as well as dairy-free soup. Depending on what you’ve got lying around, you can make any adjustments as well. Enjoy!

a few cups of vegetable  broth or stock

any kind of fresh herbs – I used rosemary, sage, oregano, and thyme but use whatever you’ve got.

1. Chop the garlic and onion and saute in a generous splash of olive oil in a big pot.

2. Stick your cherry tomatoes in the oven with more olive oil and bake until they collapse into themselves.

3. Chop the potatoes, add to the pot and saute for a few minutes, stirring every so often so they don’t stick.

4. Repeat with the zucchini.

5. Once the vegetables have softened a bit, pour enough broth or stock to cover them and let the soup simmer for about 15 minutes or so.

6. While the soup simmers, check on the tomatoes. When they’re done, drop them into the soup and stick the bread into the oven (or the toaster if you happen to have one of those newfangled thingamabobs). Toast until brown and crunchy and them crumble into the soup.

7. Toss in the herbs, chopped fine, and add salt & pepper. If you want to get all crazy, you can also stir in cheese. According to growing communities, feta, blue cheese and cream cheese all work well.