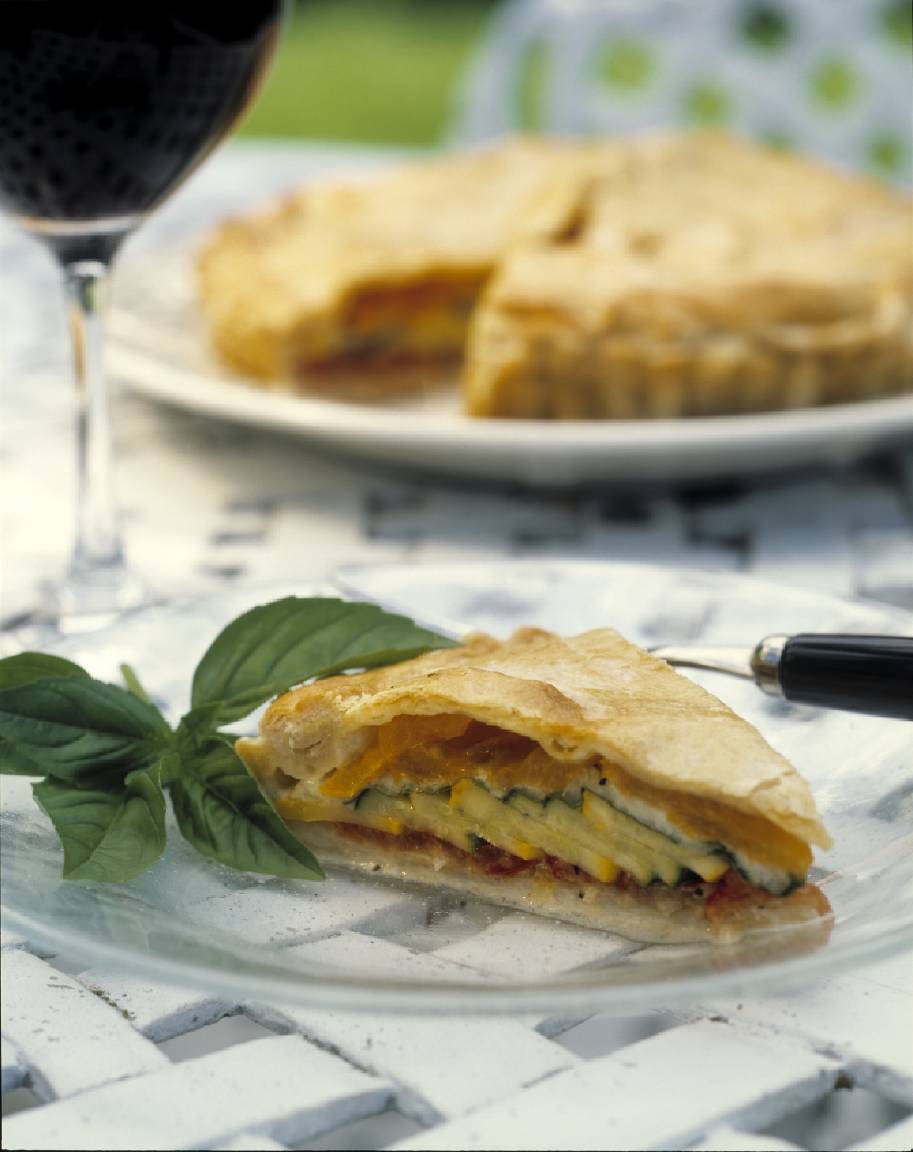 Is it a cake, a pie, or a wrongdoing for which a legal claim for damages may be brought? A torte – not to be confused with a legal tort – is a sweet, rich Austrian cream cake covered with nuts or fruits that originated in Austria. This savory version resembles a vegetable pie. I use the best of summer’s bounty, layer it with fresh mozzarella and enclose it in pastry. The flavorful roasted red pepper sauce adds a touch of sweetness and color.

Legend has it that mozzarella was first made when cheese curds accidentally fell into a pail of hot water in a cheese factory near Naples. For this recipe, use fresh, high-moisture cow’s milk mozzarella that contains more than 52% moisture, or Capriella (half goat’s milk, half cow’s milk mozzarella) from the Mozzarella Company in Dallas, Texas. Paula Lambert founded the business in 1982, using the same exacting methods for handcrafting fresh mozzarella that she witnessed while living in Italy.

To Prepare the Torte Shell: Preheat oven to 400°F.

Gently flour a table or cutting board and a rolling pin. Cut the dough in half and place it on the board. Using a rolling pin, roll each piece of dough out from the center until it forms a circle about ½-inch thick. Turn dough over and roll until you form a circle about ⅛-inch thick and 12-inches in diameter. Dock the pastry by pricking the entire surface of the dough with a fork or pastry docker. Press one dough circle into a 12-inch tart pan and trim off the excess pastry. Place the remaining circle on parchment paper on a baking pan and refrigerate both for 30 minutes.

Blind bake the tart shell by placing the tart pan on a baking sheet. Line the dough with foil or parchment and fill it with dried beans or pie weights. Bake for 10 minutes. Remove beans and bake 10 minutes or until the bottom is a light golden brown. Remove from oven and cool tart shell on a rack for 30 minutes before filling.

To Prepare the Filling: In a medium-sized sauté pan over medium heat, add the oil. Add the onions and season with salt and pepper. Sauté until tender but not colored, about 8 to 10 minutes. Remove onions and allow them to cool completely.

Place torte on a baking sheet. Bake in 375°F oven for 35 to 45 minutes or until top is golden brown and vegetable filling is soft. To test for doneness, insert a skewer into the center of the torte. If it encounters no resistance, it’s done cooking. Remove torte from oven and place on a cooling rack to cool.

To Prepare the Red Pepper Sauce: Preheat oven to 375°F.

Place peppers on a baking sheet and place in oven. Roast 15 minutes, turning once or twice, or until the skin of the peppers are slightly charred. Place peppers in a paper bag, seal the top and allow them to steam 10 to 15 minutes. When peppers are cool, remove the skin, stems and seeds. Roughly chop the peppers.

To Serve: Remove torte from pan. Cut torte into 4 to 6 wedges and serve with red pepper sauce.

Advance Preparation: The torte can be made a day ahead, refrigerated and reheated in a 250°F oven for 20 to 30 minutes or until warm.

Substitutions and Options: You can substitute puff pastry, usually available in the freezer section of your market, for the tart dough. Allow the frozen puff pastry to come to room temperature, dock the pastry, roll it out and bake per the tart dough instructions.

Wine Notes: A Sangiovese-based red wine with a long, spicy, herbal finish will work perfectly with the tomatoes and peppers in this dish. Recommended: Eola Hills, Lodi Sangiovese, Oregon for a lighter “summer wine” or Maryhill, Proprietor’s Reserve Sangiovese, Columbia Valley, Washington a wine with a bit more complexity than a generic Chianti.

Makes one 12-inch torte, 4 to 6 entrée servings or 8 to 10 appetizer servings