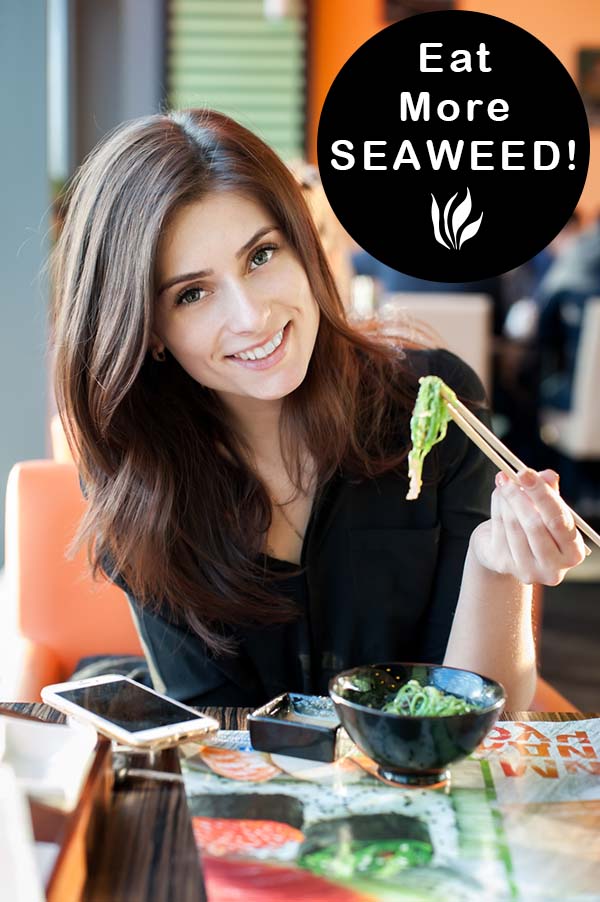 The greens of the sea are rich in flavor and nutrition, and it’s good for almost everybody to include some sea veggies as part of their daily diet. Learn the health benefits of seaweed, plus two things to consider when choosing sea veggies for cooking.

Most of us are familiar with nori, the flat seaweed wrapping outside of sushi, but there are literally dozens of varieties of seaweed that can be enjoyed in a variety of ways. And there are so many seaweed health benefits!

Seaweed is a great source of fiber, calcium, iron and trace minerals. Overall, it looks like arame and dulse have the best nutrition content of the seaweeds, but both wakame and nori have a lot of nutrition too. Here are some of the main macronutrients and trace minerals found in seaweed and how they support our health (All nutrition information from Eden Foods.):

Calcium is an important mineral for healthy bones and teeth, cellular function, and more. Calcium from plant foods is more bioavailable (better used by our body)  and overall more beneficial than dairy-based calcium. Countries that have the highest rates of dairy consumption also have high rates of bone issues like osteoporosis; dairy is also linked to chronic inflammation, heart disease and cancer.

Iodine is an essential nutrient, important for fetal development and thyroid hormone production. Seaweeds are the best foods for getting natural iodine into our diet. Seaweeds are variable in their iodine content. While too much iodine can be problematic, a small amount every few days (like the amount found in seaweeds) will keep your thyroid and other organs working well. Note that dietary iodine is different from potassium iodide, which is used to prevent radiation damage to the thyroid.

Sea vegetables contain high amounts of trace minerals, those that our body need in very small amounts. It turns out that seaweed is one of the best sources of trace minerals: “Seaweeds provide all of the 56 minerals and trace minerals required for your body’s physiological functions in chelated, colloidal forms. Most enzymatic functions depend on minute amounts of bioavailable trace minerals. The major minerals are instrumental in all kinds of life-sustaining activities in your body: magnesium is crucial in calcium absorption, iodine in thyroid function, iron in blood oxygen exchange, and chromium in blood sugar regulation. All of these functions are facilitated by the presence of chelated, colloidal minerals.” You can learn more about trace minerals here.

A note about arsenic: Hijiki is the only seaweed recommended in serious moderation due to the naturally high concentration of inorganic arsenic, which can be toxic in high amounts. Many countries have strongly advised against its consumption, but other advisory boards suggest that it is fine to eat on occassion.

The Hong Kong Centre for Food Safety explains: “safety assessment showed that occasional consumption of small amount of hijiki is unlikely to cause adverse health effect. However, people who are fond of hijiki are at greater risk [for gastrointestinal effects, anaemia and liver damage]”.

A note about radiation: As much of our seaweed comes from the Pacific, students and friends often ask about the radiation in seaweeds as a result of the Fukushima nuclear plant disaster a few years ago.

It is really unclear what the answer is to this troubling question. This post from 2012 shares measurements of nori seaweed, but in this 2013 article, the author explains that while there was Fukushima radioisotopes present in the kelp off the California coast, just one month later it no longer present.

Eden Foods says none of their foods have tested as contaminated, and so does Rising Tide Sea Vegetables. Main Coast Sea Vegetables also tests their products, and have found no detectable levels of radiation.  And seaweeds can actually help fight radiation poisoning. To learn more about radiation in our world, check out this detailed post from The Holy Kale.

A version of this article originally ran at Vibrant Wellness Journal, republished here with permission. Seaweed images via Shutterstock,