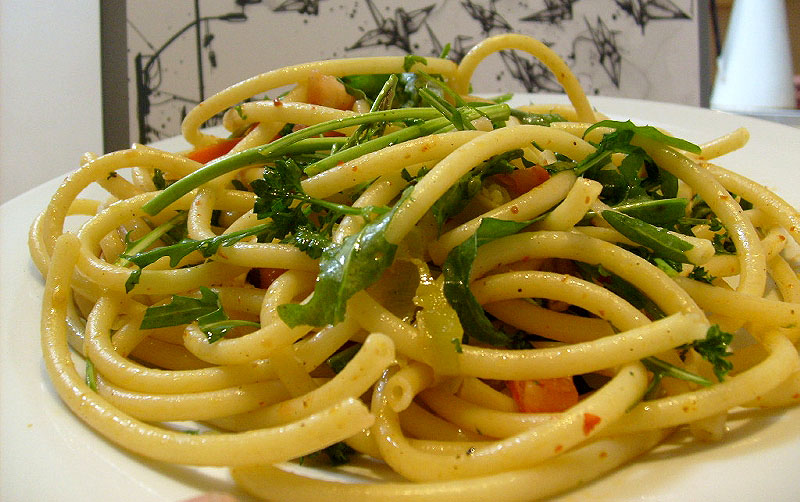 If you’re anything like me, you’ve probably found yourself in the situation of being ready to make dinner but then realizing you haven’t bought groceries in a while and there’s not much to eat in the kitchen. When you’re hungry but also too lazy to leave the house to go shopping, it’s time for some serious MacGyver action. But instead of defusing a dangerous bomb with just a paper clip and duct tape, the task is to create a tasty meal with the only tools in front of you: the contents of your fridge and pantry.

Thankfully, there are a few recipes that can nearly always be created at the last minute with just a few ingredients. One of my favorites is Spaghetti Aglio e Olio, which sounds complicated but is just a simple and delicious dish of pasta with olive oil and garlic. I’d venture a guess that most people usually have a box of dried pasta stashed somewhere in the kitchen and olive oil and garlic are generally pantry staples. Ta-da! You’ve got the makings of Spaghetti Aglio e Olio. If you happen to have any other fresh vegetables in the house, you can toss them in as well. It’s a great way to cook green by using up produce before it goes to waste and cooking a filling and tasty meal without any meat.

This dish happened by chance for me today as I realized there was only one edible item in my cupboards at lunchtime other than spices, condiments or alcohol: a lone box of bucatini (in my defense, I just moved and therefore don’t have a stocked pantry).  My refrigerator was slightly more promising: two just-approaching-the-precipice-of-going-bad tomatoes, a jar of pickled peppers, and a small bag of locally grown arugula from my organic veg box.  I tossed the extra veggies in with the pasta and miraculously, a totally legitimate dish of Spaghetti Aglio e Olio with Tomatoes, Peppers, and Arugula was created from the barren wasteland of the kitchen.  Here’s how to recreate the spaghetti pictured in the photo above, but feel free to play around with the ingredients and use whatever you have at hand.

1. Start boiling water for the spaghetti.

2.  Heat a generous pour of olive oil on low heat in a pan large enough to fit all the cooked spaghetti.

3. Chop the garlic, and add to the olive oil. Cook over low heat until the garlic softens and turns a little translucent, then remove from heat.

3. Boil the spaghetti and drain.

4.  Heat the garlic and oil up again slowly, then add the pasta to the saucepan. Lightly sauté the spaghetti in the olive oil and garlic while adding the pickled peppers, the pepper flakes, and salt and pepper. Typing that made me realize that’s a lot of peppers. Feel free to omit some.

5. Once the spaghetti is fully coated with the garlic and oil mixture, remove from heat and toss with the arugula. You could also use raw spinach here, as well as a cooked leafy green like chard or kale.

This would also be delicious with some fresh parmesan if you have some around. I didn’t, because I desperately need to buy groceries. However, even if I don’t have a well-stocked kitchen, I can still be a MacGyver of the kitchen.  Be creative, cook with what you’ve got lying around and you can be too!