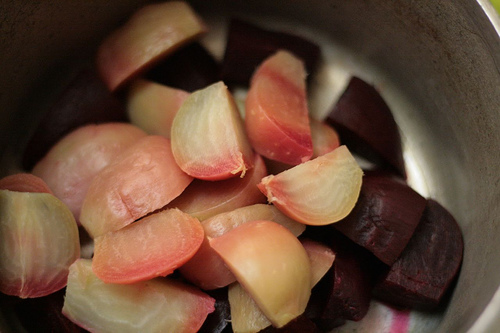 With the rising costs of food (and everything else to boot), I’m sure I’m not the only one who has vowed to be more frugal with menus by using up what’s already in the fridge before heading to the market.  To this I say, “here, here!!”   That was until I started looking around my own fridge and realized I should have taken on this resolution about four months ago – moldy cheese, sad-looking shriveled carrots, and dried out halves of onions that I was sure I’d use up the next day but forgot all about and ended up cutting a fresh onion.   Frugal I am not.

Instead, those bright and shiny new bunch of beets I’d plucked from the farmer’s market immediately caught my attention.  I know I had opened the fridge with the intention of salvaging something that might otherwise go to waste, but as it was, I thought I’d give the beets a chance before they too shriveled up in the crisper drawer.  After all, the spring beet season is fast drawing to a close.

The flavor proved to be superb for this Sauteed Beets with Mustard and Lemon recipe.   Since my beets were rather small, they were actually boardering on sweet.  Thus, I upped the lemon juice and later wished I had upped the chile pepper too.  Adjust your seasonings according to personal taste and the quality of your beets.  I’m sure you’ll agree this dish is deliciously light and a beauty to behold on the plate! What’s your favorite recipe for beets?  If you’re still stumped and want a few more ideas, check out these links:

Scrub beets well.  Cover with water in a saucepan and bring to a boil.  Lower the heat and simmer, covered, until tender – about 20 minutes depending on the size of the beets. Drain and let beets cool before sliding off their skins.  Chop beets into half inch thick wedges.

Heat the oil in a large skillet or wok over high heat.  When the oil begins to smoke, add the mustard seeds, covering to avoid splattering.  Once seeds stop sputtering, add chile pepper slices and stir once before adding beets and salt.  Toss to coat with oil and then cover and let beets steam over low heat for another 5-6 minutes.

Remove from heat and place in serving dish.  Toss with lemon juice and cilantro.  Serve warm or cold.