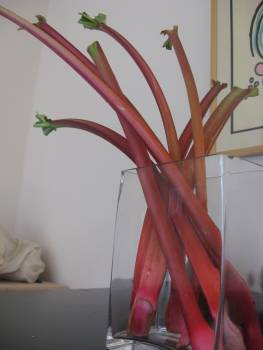 In junior high school, I had a quirky music teacher (is there any other kind?) who would occasionally launch into monologues on a myriad of topics including, but not limited to: what a loser her ex-boyfriend was; amusing malapropisms from her overbearing opera coach, Hilde; and life “on the stage.” I remember these well because it was the first inkling I had that teachers carried on real lives outside of the confines of school, but also because there were a few key phrases that have managed to remain in my addled brain since. One of these was “rhubarb and spinach.” During rehearsals for our production of Guys and Dolls, the music teacher instructed us to repeat this phrase in low voices whenever we were supposed to evoke a low din during a street or party scene. Our music teacher assured us that extras in movies are instructed to repeat the phrase and that it was a standard acting method. To this day, I can’t look at rhubarb without thinking, “and spinach.”

So, spotting some Ontario-grown stalks at the market today, I set about attempting a music teacher-inspired salad of rhubarb, spinach and you know, something to make it taste good. I assembled an arsenal of apple cider vinegar, local honey, olive oil, cucumber, walnuts and goats cheese. Excited, my boyfriend and I tucked into our bowls only to see mirrored faces of horror, followed by laughter and then a bit of choking. As much as rhubarb’s tart, grassy taste refreshes, the vegetable has no business being the focal point of a meal. And so I retreated to dessert where I know how to make rhubarb belong. With the remaining stalks, I made a compote/syrup concoction that tasted great and purely rhubarb-y ladled over homemade vanilla bean ice cream.

Put rhubarb pieces, water and sugar into a pot and simmer for 15 or until rhubarb is soft. Transfer mixture to a blender (or use an immersion blender) to blend until smooth. Pour through a strainer back into the pot and heat on low, stirring. Add coagulant and lemon juice and more sugar to taste. Once thickened, its ready to use. I poured it over homemade vanilla ice cream, but it would be great for brunch with waffles, blintzes or panzanella or with angel cake for a light dessert.