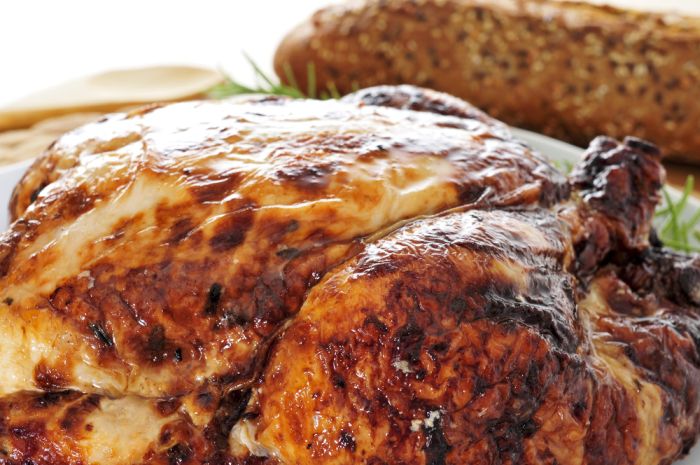 Turkey stock is so simple to make and it adds a great deal of flavor to soups and casseroles. Use up the leftover Thanksgiving preparations and get one more use out of the turkey bones.

I don’t add much seasoning to the stock. I keep it fairly plain so that it’s more versatile.

After removing as much meat from the turkey as possible, place the leftover turkey bones into a large stock pot or Dutch oven. The turkey bones don’t have to be perfectly clean. Any meat left on the bones will flavor the stock.

The bones might need to be cut into pieces to fit better in the pot. Keep them in large pieces, though. Small pieces don’t cook faster; they’re just harder to get out of the stock later.

Add any leftover aromatics and vegetables from the preparation of Thanksgiving dinner, such as onion, garlic, shallots, etc.

Add water to cover the bones. Bring to a boil on the stovetop. Skim off any fat or foam from the top.

Reduce to a simmer. You want wispy bits of steam coming off the top of the liquid, but not bubbles. Leave the lid off. Simmer for two to three hours, then remove from the heat.

Allow the liquid to cool for about twenty minutes. You can remove the bones with a spoon or tongs and throw them out. The vegetables are still edible, although they will be quite mushy. Eat them, if you like, but don’t throw them on the compost pile. After they’ve been in the stock, they will attract vermin to your compost pile.

Set a large bowl in the sink. Tuck a dish towel or two around the base of the bowl for stability. Pour the stock through a cheesecloth lining a colander and into the large bowl.

Divide the stock into portions and freeze. Use ice cube trays for smaller tablespoon-sized portions or use muffin tins for larger 1/2-cup portions. Once the portions are frozen, remove the stock and place it into a freezer container.

Stock can be stored in the freezer for up to six months or in the refrigerator for one or two days.

To use, just heat the required portion with the rest of the ingredients in whatever recipe. The turkey stock goes great in stews and to flavor vegetables.