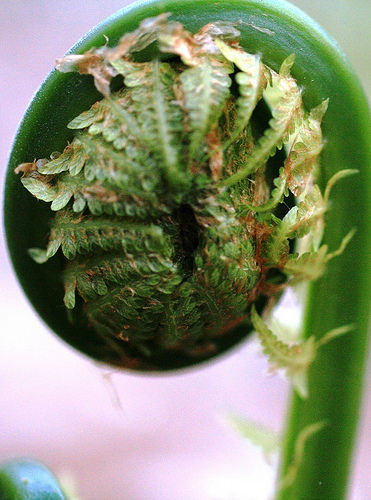 What’s your favorite mythological creature? Unicorns? The Loch Ness Monster?  The Yetti?  Lake Champlain’s Champ?  El Chupacabra?  Up until yesterday, I might have said the Fiddlehead, had I been asked.   Like all the previously named questionable characters, there are many pictures to prove their existence (heck, there’s even a picture on one of my sets of business cards), and yet, somehow, I’d never seen one for myself.  The curly heads rising up on slender necks from the forest floor resemble an other-worldly creature for sure.  And in the culinary world, fiddlehead ferns are almost unmatched in their elusive promises of gourmet delight, much like morels or truffles.

Only a few varieties of ferns yield edible fiddleheads, and they are most often foraged from the wild. To add to the challenge, fiddleheads, which are tightly coiled shoots that are just itching to unfurl into fern fronds, only come into season for a few short days each spring.  Since both their arrival and their point of unfurling are entirely dependent on the temperatures, rain levels, and amount of sunny days each spring, it’s amazing to me that anyone ever finds them.

It’s even more amazing to me that I finally ran across them! The Ostrich Fern is the only fern I’d trust, based off what I’ve read and heard, to eat the fiddleheads, and there just happen to be several in the woods around the gardens where I’m working.  Before you go hunting for them yourself, be sure you can identify your ferns with certainty as the fiddleheads of some very similar looking ferns can cause food poisoning.  Don’t fret though if you aren’t a master fiddlehead finder.  There are fiddlehead harvesters who sell their finds at farmers markets and even online.  While fiddleheads are best eaten promptly after harvest, they can be refrigerated for a week or more.  There is one rule of thumb for cooking fiddleheads though and that is to cook them.  Raw fiddleheads, even of the Ostrich Fern variety, can also cause food poisoning. So be sure to boil your fiddleheads, if you’re lucky enough to get them.

I really enjoyed this dish and wish fiddleheads weren’t so short in season (the ferns from which I got mine unfurled just two days after I harvested mine). Fortunately, this preparation of the corn would be delicious on its own, garlicky and sweet with a little salty bite.  So, if you don’t have fiddleheads, you can still have the corn.  And believe that fiddleheads do exist, if only because I have pictures to prove it! Trim off the discolored ends of the fiddlehead stems. Place fiddleheads in a bowl full of cool water and swish gently, allowing them to soak while you mince the garlic and rosemary.

Bring a small pot of water up to a boil. Add the fiddleheads and boil gently for five minutes. Remove with a slotted spoon and rinse in a bowl of cool water, changing the water two or three times. This rinsing process helps remove the tannins that might cause the fiddleheads to be bitter.

In a medium skillet, heat the oil and butter together until butter melts. Add the rosemary and garlic. When the contents of the skillet start to bubble and get noisy, add the fiddleheads and fry until browned, about two minutes. Remove with a slotted spoon and set aside. Now add the thawed corn to the skillet and toss several times, adding a generous pinch of salt and pepper. When corn is hot and starting to brown ever so slightly, remove from heat.

To serve, mound corn on a dish and place fried fiddleheads on top. Sprinkle with another small pinch of salt and serve immediately while still hot.