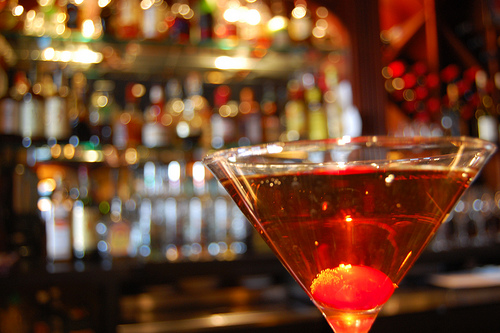 Throwback cocktails are all the rage these days, and drinking at home frees you from $8 drinks and designating a driver. What separates ordinary swill from killer cocktail recipes can be as simple as the addition of aromatic bitters.

If your bitters are made at home, you’ve got an ultimately customizable addition to any good drink. And you can re-use the container, and buy bulk spices. Sustainability in a bottle!

What are aromatic bitters you say? Why, saddle up to the bar and lend an ear. Bitters are indispensable additions to countless cocktails, and you may be familiar with a couple of house calls that beckon for bitters, including the Sazerac, Manhattan, and LLB (lemon, lime and bitters). Thing is, bitters were kind of an ol’ timey thing until a couple of years ago when the cocktail began to stage a bit of a comeback.

Bitters started out as “a tincture of any number of esoteric roots and herbs with an alcohol base“, and became a common addition to many cocktails. One of the first cocktails, the Sazerac, was invented by a Frenchman who popularized the drink in New Orleans. His drugstore, the Pharmacie Peychaud, served up drinks in a coquetier (that’s french for “egg cup”), which is where the name “cocktail” may have come from. Ok, enough history. Let’s drink!

Bitters usually contain some kind of combination of aromatic spices including bark (cinnamon or angostura), citrus peels, berries, seeds, roots or extracts, and sometimes fresh or preserved fruit. They also include alcohol, ranging from Everclear 151 to Campari. So, get your hands on some spices (sustainably-produced would be a good choice; ForesTrade is a prominent supplier that does excellent work with conservation and sustainability).

Ok, once you’ve got all your ingredients, grab a recipe. I’ve reproduced one here from Chow.com, who have an awesome story on their site about bitters, complete with beautiful photos. They’ve also put up recipes for Grapefruit, Cherry Vanilla, Orange, and Sunshine Bitters. I’m getting thirsty.

Peel the lemon for its zest, and throw everything in a jar with a tight lid. Let ‘er steep for a couple of weeks, turning the mixture every other day to keep things mixed well. Everclear 151 works well in this case, because it takes on the flavors from the fruit and spices, and doesn’t contain many impurities – hence, “Everclear”. If you can’t find Everclear (it’s illegal in some states), get the highest proof booze you can. You won’t be drinking this straight, anyway.

And that’s really all it takes to make an all-star ingredient for classic, delicious cocktails. For me, there’s nothing better than making your own booze, and this is pretty close to it. Plus, your friends won’t believe you made an herbal tonic from scratch that made their Manhattan unbelievable. It’ll be our little secret…