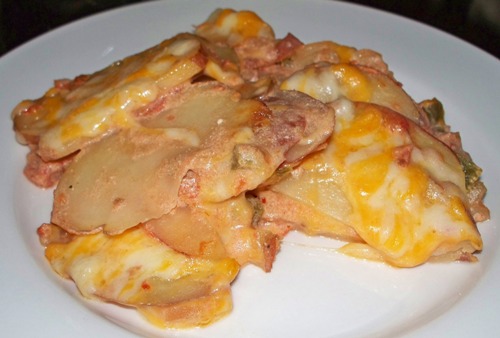 A quick trip to the farmers market Saturday afternoon netted me several more pounds of fresh fruits and vegetables. The canteloupe vanished soon after arriving home. My daughter had me cut it open and scoop out the seeds for her and she sat down on the sofa with a melon baller. Ten minutes later, it was gone.

While she gobbled down the melon, I surveyed the fridge for dinner. I needed to use up some leftovers from a party earlier this week where I served dips and chips. I had a half jar of salsa and some sour cream left over. With the red potatoes and jalapeños I bought today, I had the makings of a good side dish for dinner.

Jalapeño peppers have a great deal of flavor, as well as a bit of heat. Even if you don’t like spicy foods, I encourage you to leave them in for the vitamins A, C, K, B6, folate, and manganese, but most importantly, the flavor.

Most of the heat is in the ribs (white part) and seeds. To remove the ribs and seeds, cut the ends off the pepper and quarter it lengthwise. This makes the white part easy to slice out. The seeds are not attached, so just sweep them out with a finger. After you have removed as much of the ribs and seeds as you want, then chop the peppers.

If you have an open cut on your hands, wear gloves when preparing any food, but especially jalapeño peppers. Also, don’t touch your eyes. Wash your hands with soap and water after cutting the peppers.

Slice the red potatoes about 1/8-inch thick. Seed and chop the jalapeños.

Put the potato mixture into an oven-safe dish, either an 8×8 square casserole or an 8- or 9-inch diameter round casserole. Cover tightly with the lid or aluminum foil. Bake for 45 minutes for firm potatoes, 55 minutes for more tender potatoes.

Remove the lid and sprinkle the shredded cheese in an even layer on top. Return to oven for 10-15 minutes uncovered, until the cheese is hot and bubbly.