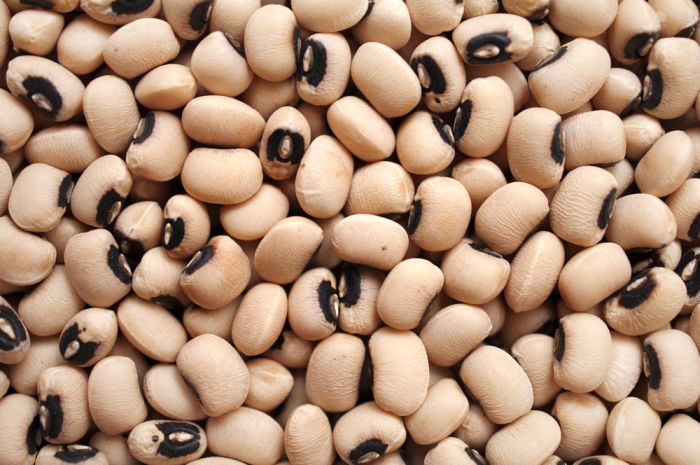 Black-eyed peas have about 200 calories per one-cup serving (before you add the other ingredients in the recipe) and good quantities of calcium, folate, vitamin A, and protein and fiber.

A traditional New Year menu includes black-eyed peas, greens, and cornbread. The black-eyed peas are said to bring luck. The greens, such as collards or kale, represent household finances. Cornbread is the color of gold and represents spending cash or coins. Sweet tea and water go well with the meal.

For cornbread, try this cornbread recipe.

When preparing dried black-eyed peas, or any dried legume, remember to pick through the peas and pull out any stones or other debris. The stones are the same color as the peas, so check carefully. After removing all the foreign objects, rinse the black-eyed peas. There’s no need to soak the peas, since they’re going into a slow-cooker.

Chop onion and garlic fine, but keep them separate. Heat vegetable oil in skillet over medium heat and add onions. Saute onions until a little soft, two or three minutes. Add the garlic and saute another two minutes.

Put all the ingredients into the slow cooker, except ½ cup of the barbecue sauce. Cook on high for 5-7 hours or on low for 9-11 hours. About thirty minutes before the time is up, add the second ½ cup barbecue sauce and stir in. Cover and cook the remaining thirty minutes.

Serve with greens and cornbread.