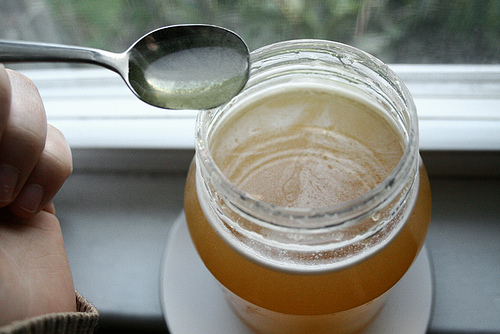 According to a study done by Food Safety News, three-quarters of the honey sold in the US is not proper honey.

What this means is that the honey sold is missing pollen. This is a product of ultra-filtering the honey, which is unnecessary, reduces nutrition and is only used to obfuscate the source of the honey.

Why would you cover the source of the honey? It’s a complex mix of economics and food policy that too often results in illicit honey from China and other countries making its way into the United States. It’s not that the honey from these countries is inherently bad, but it can be, and has been in the past.

What is proper honey?

Honey naturally contains a certain amount of pollen from the flowers from which bees get nectar.

According to US standards, any product that’s been filtered so much that it no longer contains pollen cannot be labelled as honey. Such a product would also flunk tests used by other world food safety organizations to determine the legitimacy of the honey.

Why is honey ultra-filtered?

Honey is normally filtered to remove things like bee parts that consumers do not want in their honey. This is normal and acceptable. Turns out most people don’t like to see legs and wings in their honey. (However, the best honey I’ve ever had had bee parts in it…)

Honey is ultra-filtered to remove pollen so that its origin cannot be traced. This may not seem like a big deal, but there have been problems with honey from China (both economical and food safety-wise), and honey is laundered from China through other countries to the United States and somewhere in the middle, the pollen is filtered out solely so that its origin cannot be traced.

“There is only one reason to ultra-filter honey and there’s nothing good about it.”

Ultra-filtering diminishes the quality of the honey, removing a key component and nutritional value, and no reputable source of honey would do this.

What is the FDA doing?

Chinese honey is heavily tariffed because its low prices were putting American bee keepers out of business. This is why it is laundered, like a black market for honey.

The FDA put little resources into ensuring honey safety and quality. Pollen analysis is the only sure way to determine the origin of honey, and fewer than five laboratories do such analysis…and it is not cheap.

An example of a result of this inaction is that laundered Chinese honey, which was contaminated with antibiotics and other chemicals, was found to have been distributed by Smuckers and Sara Lee several years back.

It is suspected that less than 5 percent of honey imports are ever checked…so they are not doing enough. You are on your own.

“I don’t know of any U.S. producer that would want to [ultra-filter honey]. Elimination of all pollen can only be achieved by ultra-filtering and this filtration process does nothing but cost money and diminish the quality of the honey.”

“In my judgment, it is pretty safe to assume that any ultra-filtered honey on store shelves is Chinese honey and it’s even safer to assume that it entered the country uninspected and in violation of federal law.”
-Mark Jensen, president of the American Honey Producers Association

Time for the results