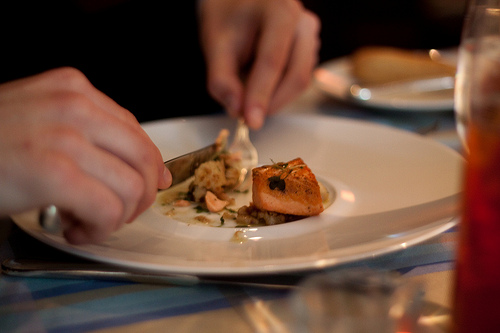 What’s so bad about the genetically engineered salmon?

To understand this, you need to understand how the genetically engineered salmon is made…yes, made. This is why it is dubbed Frankenfish.

OK…so how is Frankenfish made?

The genetically engineered fish’s DNA has also been modified with anti-freeze genes, so that unlike proper salmon, which die when they are exposed to ice, Frankenfish will not.

Now we can understand why this is bad news…

If these ginormous freeze-resistant fish ever got into the wild, they would surely obliterate their non-genetically engineered cousins. Being twice the size and able to survive freezing conditions is quite the competitive advantage!

All hope is not completely lost though:

Please write your members of Congress today and urge them to protect the environment, fishers, and consumers by co-sponsoring the anti-frankenfish bills!

Source: Friends of the Earth