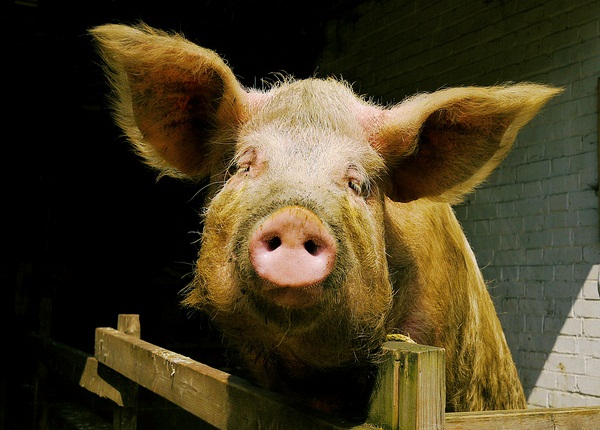 A recent HSUS undercover investigation revealed nine employees of Wyoming Premium Farms engaging in extreme animal cruelty, and charges were filed against perpetrators on Monday. As long as there’s a demand for huge amounts of cheap meat, and as long as producers can count on good people to look away, systemic abuse is inevitable. It’s also completely optional: you vote with your fork every single day, on whether or not this kind of cruelty should occur — and it’s just not that hard to vote ‘no!’

Why They Want Ag-Gag Laws

HSUS documented the cruelty incidents during an undercover investigation, including:

…workers kicking live piglets like soccer balls, swinging sick piglets in circles by their hind legs, striking mother pigs with their fists and repeatedly and forcefully kicking them as they resisted leaving their young.

The HSUS conducted an undercover investigation of the Wheatland, Wyo., facility earlier this year. In the resulting undercover video, workers appeared to punch and sit on a pig with a broken leg, and in another instance, flip piglets through the air.

In an exclusive interview earlier this year, an HSUS investigator told HuffPost, “When you walk in, all of these sows are showing this volume of insanity. They’re swaying, they’re biting the bars, they’re listing in front of the cages and they’re docked and bloody.”

She claimed the workers “would just kick a sow in the face to get her to turn around, and the sow would scream and run away. … And they think it is normal, because they’ve just been doing it for so long, or because that’s just how everybody else does it, or just because that’s the easiest way.”

According to one CBS news report,

“The level of abuse was ruthless. As you can see in the video, workers were vicious with animals; punching them in the face, kicking them, cursing at them, jumping up and down on their broken limbs,” Paul Shapiro with the Humane Society of the United States said. “This is the type of abuse that is so extreme that most people would be appalled to bear witness to it.”

Watch the video, if you can stand it.

And if you can’t stand it… why in the world would you be willing to support it?!

“NOT OUR FAULT!!!” Scream the Guilty

Like every single time, over and over and over again, the business who allowed, facilitated, and condoned this inexcusable behavior claims they had no idea what was going on under their noses. Is anyone surprised?

Industry’s basic argument, no matter how many times they’re caught participating in flagrant animal cruelty, goes something like this:

That’s probably why they pursue ag-gag laws with such desperate enthusiasm, to criminalize undercover investigators and thereby keep their completely aboveboard and non-cruel practices secret from their customers.

The sick truth is that such cruelty is psychologically inevitable, within the meat industry; indeed, it is standard practice.

Commodification of living creatures, coupled with the normalization of repeatedly inflicting violence on screaming animals, guarantees callousness and cruelty among those required to perform it. And our cultural passion for cheap meat at any cost leads producers to cut corners wherever they can — if cruel practices are profitable (hint: they are), then they will occur. Industry knows no other yardstick for success.

As Melanie Joy points out in Why We Love Dogs, Eat Pigs, and Wear Cows,

In any violent ideology, those in the business of killing may not be jaded when they start out, but they eventually grow accustomed to violence that once disturbed them. Such acclimation reflects the defense mechanism routinization — routinely performing an action until one becomes desensitized, or numbed to it.

For instance, agricultural investigator Gail Eisnitz interviewed a slaughterhouse worker who told her: “The worst thing, worse than the physical danger, is the emotional toll. If you work in that stick pit [killing animals] for any period of time, you develop an attitude that lets you kill things but doesn’t let you care. You may look a hog in the eye that’s walking around down in the blood pit with you and think, ‘God, that really isn’t a bad-looking animal.’ You may want to pet it. Pigs down on the kill floor have come up and nuzzled me like a puppy. Two minutes later, I had to kill them — beat them to death with a pipe. I can’t care.”

When a human being is routinely expected to treat living creatures as inanimate objects — required not to care about the suffering of other beings — acts of animal cruelty become both normal and inevitable. All trace of innate human compassion must be mercilessly suppressed, to continue performance of such work — one must become immune to empathy, or else become unemployed. This desensitization makes cruelty inevitable.

The roots of this desensitization to suffering lie in what industry calls ‘standard practice,’ thereby legally (though not morally) exempt from penalty under animal cruelty laws. Again: watch if you dare.

What Can You Do About It?

This sorry state of affairs isn’t mandatory — we don’t have to support things we can’t bear to watch! The animal agriculture industry desperately hopes you’ll never see where your meat comes from; and that if you do, you’ll turn away and pretend otherwise.

If you value compassion and nonviolence — if you condemn animal cruelty and the systematic torture of living beings for no better reason than human pleasure — consider a new food paradigm, for the New Year. Going vegan (or vegetarian, or mostly-vegan, or whatever feels possible for you!) is the simplest, easiest way to put your money where your values are.

Each time we glimpse the truth of the intrinsic cruelty of the meat industry and turn away from it, we diminish ourselves, individually and collectively: by choosing to distance our actions from our values, we embrace complacency, apathy, and indifference to the suffering of others.

Change is always challenging, but once you embrace new habits eating vegan becomes joyful, satisfying, and effortless! The cruelty relentlessly churned out by the meat industry — over and over and over again — absolutely depends on consumer ignorance and apathy.

Give them neither! Don’t support what you abhor. Reject cruelty, and embrace a diet reflecting your values of compassion and nonviolence: consider a new approach to food, for the New Year.

Go here to explore a more compassionate and less cruelty-ridden paradigm: cast your vote to end agricultural animal cruelty, every time you sit down to dinner.

The documentary Ethos offers an excellent summary of why what you buy matters:

I say we resolve, as a society, to explore the revolutionary idea that maybe – just maybe – the intersection of food choices and personal values can transcend convenience. That maybe what you buy, what you eat, and what you support have implications well beyond anything those anemic adjectives ‘fast and cheap’ can possibly justify.