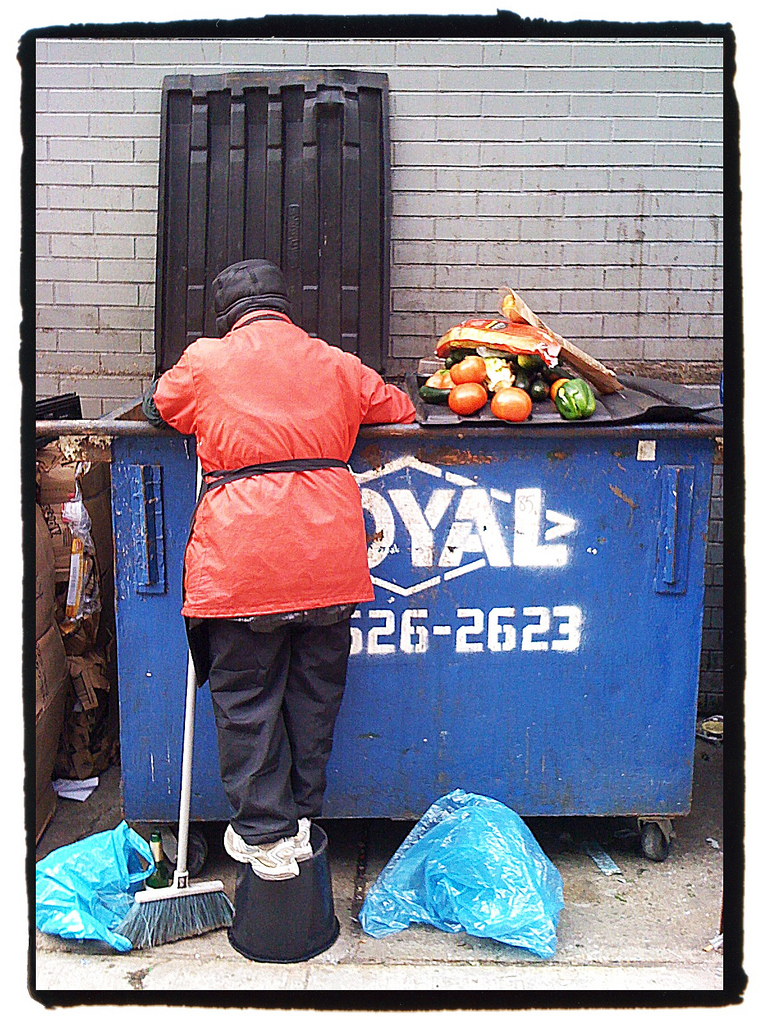 Dumpster diving. When I first heard that phrase, I was in college and I imagined something along the lines of swimming in a pool of garbage.

What dumpster diving actually is, well, it’s not far from that picture, though the intention for some is much less whimsical than a bunch of college girls with matching T-shirts looking for free furniture.

Many dumpster divers utilize urban foraging as a sort of protest against the established corporate food system and as a means to eliminate unnecessary waste. Basically, it is the practice of sifting through trash (mostly commercial, sometimes residential) in search of salvageable food, clothing, and other discarded, but still useful, items. Dumpster diving is an intentional action against a materialistic and wasteful society.

An article in Food Safety News asserts that the “ewww” factor of dumpster diving outweighs the potential positives. “There are reasons why food ends up in the trash. It’s not good, clean or healthy. Local donut shops throw away donuts at the end of the day for legal reasons. They may be good (not healthy). If a food product is in a dumpster, it’s not clean,” wrote the article’s author.

This is sort of a naive viewpoint towards a social movement that really is striving to encourage less consumption; it was written in response to a writeup in Penn State’s The Daily Collegian about a dumpster diving student. The actual responses from the student were much more intelligent and informed than the FSN article made them out to be:

“But if you really check out a dumpster, there’s one discovery that will stick with you after the smell washes away and you accept your questionable habits — there’s a lot of food in those things. Good, clean, healthy food that we can eat. Loads of it. And it ends up in the trash every day.”

This is what the FSN article fails to recognize: that there is a massive amount of food waste in this country, food that could be readily eaten.

The Collegian editorial quotes some startling, but expected, stats about our waste:

“Finally, it really is eye-opening to see just how much food is wasted. In one dumpster alone, there were at least five trash bags brimming with baked goods. In another, we found bags stuffed with meatballs, lunch meats and veggies that never made it onto a sub.

“According to the Environmental Protection Agency, Americans throw away 33 million tons of food each year. To break it down, that averages out to every person in the country taking one pound of food and tossing it in the trash every day.”

That is a lot of food being thrown away. It seems those resources could be reallocated to feed the millions of people around the world that would love to find a dumpster full of unused food.

Obviously there are dangers associated with scrounging around in a dumpster, like sharp objects, spoiled food or other disgusting items we throw away. But there are safe ways to engage in this process, if you so choose. I found this helpful article from WiseBread that offers some Dos and Don’ts:

So, dumpster diving is here, it’s weird and you better get used to it. There is no harm in acknowledging that it’s not for you. Just don’t knock it until you try it.