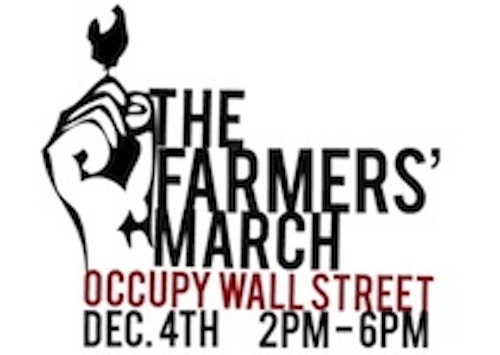 On Sunday December 4th, the Occupy Wall Street Farmers March took place in New York with speakers at the La Plaza Cultural community garden at Ninth Street, then a march to Zuccotti Park. The event featured farmers and food reform advocates who spoke out against the inequities that result from the pressure and influence of corporate power on our nation’s food supply.

The OWS movement is focusing national attention on the disproportionate distribution of wealth and power and this is certainly reflected in our nation’s food production systems, which are dominated by industrial agribusiness. For farmers to join the OWS movement is a natural dovetailing of the issues.

Currently, according to Food Democracy Now!:

Farmers of small and independent farms are among the hardest working people anywhere in any profession, yet they continually struggle to keep their land and make ends meet. Laws that govern agriculture favor agricultural corporations and are not appropriate for  small independent producers of  both crops and livestock.

Harnessing the 99%: Citizens Get Involved

Agricultural corporations run powerful lobbies under the radar of public scrutiny,  but there are dedicated individuals who are doggedly bringing attention to the alarming state of our food system, and they are harnessing grassroots strategies to bring these issues to the public. David Murphy, founder and executive director of Food Democracy Now!, is one of the people on the forefront of this effort. Food Democracy Now! is a movement comprised of American farmers and citizens dedicated to the reform of our broken food and agricultural system through online campaigns and public events such as the Farmer’s March.

The OWS Farmer’s March received limited media coverage, but you can see photo albums of the event at these blogs sites: