Ed. Note: In the wake of the outrage over U.S. dentist Walter Palmer slaughtering Cecil the lion, this piece from Chic Vegan by Calista Whitney is even more poignant. Why is there outrage over the death of a lion but not the millions of animals that we slaughter every year for food?

The Hypocrisy in Eating Certain Animals 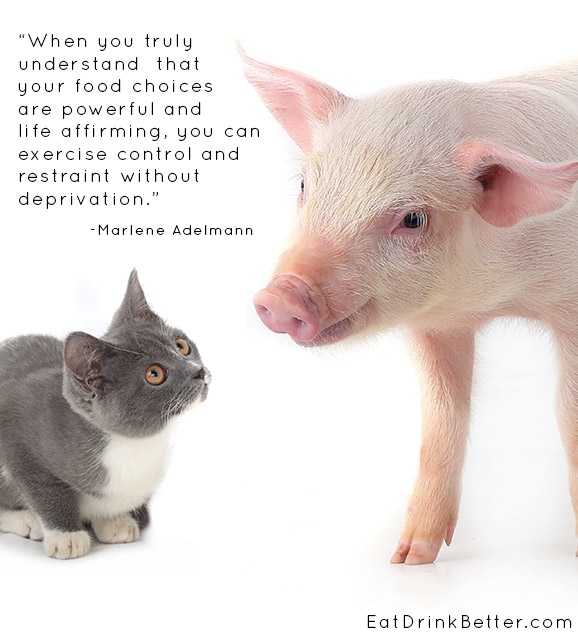 Why is it that in America we love certain animals and eat others? Do we just like certain species more? What makes it okay for us to eat one species and love another? Why do we have these preconceived notions? What really makes the difference?

In America, it is completely acceptable to eat cows, chickens, pigs, and fish. However, if you stumbled across someone eating a burger made of dog you would be horrified. What makes these species different? They are both living things. Their lives both have the same value. For some reason, it was decided that some animals are okay to eat and others are not.

In Peru, guinea pigs are eaten. In America, though, we view them as pets. Dog meat is normal in other countries. An example is China. However, most Americans view that as barbaric and disgusting.

Why do we think it is okay to love certain animals and eat others? All lives have the same value. It is hypocritical to put one life before another. Americans riot against the Chinese eating dogs as they chow down on their steak from a cow. What is the difference? There is not one.

The only thing that makes it okay to eat one animal and love another is societies’ beliefs. No life should be put above another, people need to think carefully why they think it is okay to eat certain animals and not others. It is extremely hypocritical to think others are barbaric for eating an animal you would not. I can not stress this point enough, all living things have value and should not be killed or used for human consumption.

For more information I recommend reading Why We Love Dogs, Eat Pigs, and Wear Cows: An Introduction to Carnism by Melanie Joy, PhD and foreword by John Robbins.

Pig and kitten image via Shutterstock.

Chic Vegan is a place where compassionate fashionistas and vegan vixens meet up to discuss how they can make the world a better place for people and animals alike. Chic Vegan was created in 2008 as a place for women to keep up to date on new cruelty free fashions. It has since become an extravaganza of fashion, cosmetics, self-improvement, diet, eco-love and many, many other things.

2 thoughts on “Why do we eat cows and pigs but not lions or kittens?”