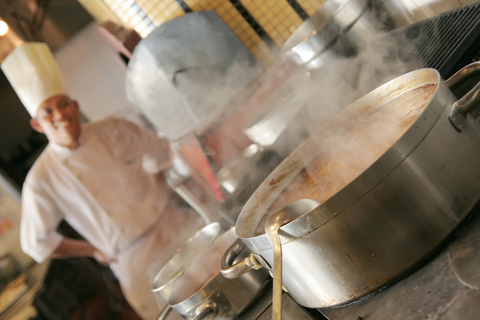 There’s lots of talk about Obama’s pick for White House Chef. Here’s an overview of who’s on the short list, plus who should be on the list. Think you’re the one? Find out how to let us know.

So, who’s might be cooking?
You can scratch Rick Bayless off the short list for White House Chef despite speculation by the New York Daily News and that Bayless’ restaurant, Topolobampo, is an Obama favorite. The two remaining names being bandied about include Art Smith, former Oprah chef and Daniel Young, who was the personal chef to Carmelo Anthony of the NBA.

Art Smith’s central theme is posted on his web site, “the sharing of a meal is a common, anticipated ritual that reunites us with loved ones and brings a sense of balance to our lives.”

Find how out to “apply” for the job after the jump …

Not a bad philosophy to help one of the world’s busiest family man remember to stay grounded and share dinner with his family. And someone who understands the power of sharing a meal is also a good choice for those diplomatic dinner events, too.

Smith gets extra points for participating in some Food Justice action with his project, Common Threads, which offers free classes on nutrition, cooking and cultural diversity to eight to twelve-year-olds who qualify for free or reduced school lunch programs in the Chicago area

His recipes on his site include Electric Lemonade. Sure beats drinking the kool-aid around Washington, I guess. Not sure how that fits into the family dinner …

Daniel Young, from Denver, was supposed to cook for Obama during an event at the Democratic Convention. The gig didn’t work out, but Young did cook for a group of Alabama delegates there.

Young currently has a catering and events company called Ultra Events. His cooking style is healthy and not too fussy, featuring fresh ingredients. Prior to the catering gig, Young was chef at The Denver Press Club and the now defunct Fat Daddy’s.

Odds on favorite for me would be Art Smith with the Chicago hometown advantage, O-connection, and his Common Threads work. But why limit the options at this point? Coming up, I will be interviewing chefs and foodies on why they would make the best white house chef.

Want your name on my short list? Send an email to farmerfare [at] gmail [dot] com with a link to your blog post that tells why you would be the best chef and what would be on your “Menu for Change.” I’ll highlight the best of the submissions, and my own menu and EDB interviews for the job here in upcoming posts.