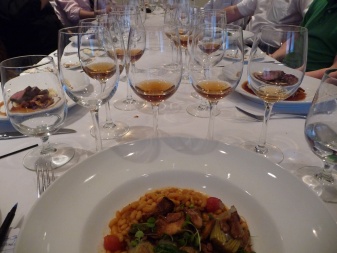 Before the recent Whisky Fest in San Francisco, a select group gathered for a whisky tasting of the Bowmore whisky which in itself should be deemed a special treat especially when sipping on the 25 year Bowmore single malt and the 44 year old (older than most us in the room) Bowmore Gold, which up until that moment had only been savored by a few ones in the U.S. Toss in the fact that we sampled this whiskey at the classic power lunch spot meets oh la la One Market and everything seemed to be going as smooth as the and Bowmore 12 and the Tombo Tuna (we hope wild caught).

But of course, being in San Fran, we struck up the whole Green thing as far as Bowmore and whisky production. The Bowmore crew being from Scotland aren’t exactly strangers when it comes to Green or sustainable practices. After all, we would have to say that whisky might be one of the ultimate slow foods. A few tastes later only spurred the spirited dialogue. The fact that Bowmore came in second in the Green Apple award a few years ago impressed us. We even liked the fact that they got downright innovative in the fact that they use the waste heat generated from the stills plant to not only dry the barley but heat the local public swimming pool as well. They also use the generated hot water to pre-heat the facility that works like a form of radiant heating.

Now we can’t over look the fact that the distillery runs on petroleum and they do emit healthy amounts of peat burning smoke into the air but each year they maintain stricter CO2 emissions than the government targets.

The mention of organics caused another stir. Not that organics represents the be all and end all of whisky ingredients but the topic opened up another barrel of whisky that we will post shortly. Where does the barrel wood originate? Are there GMOs in whisky?

We’re not going to mess with 200 plus years of tradition and think that whisky distilleries will change green overnight. Meanwhile, we got back to the task at hand. We need to savor the Bowmore Gold and the pear dumpling with brown butter caramel sauce.