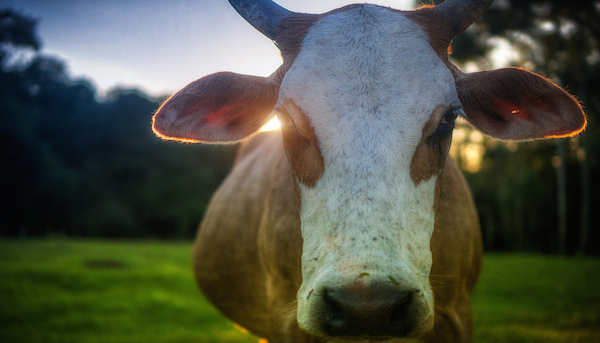 Beef is contributing more to global warming than poultry, pork, eggs or dairy, finds a study published in the current issue of the journal Proceedings of the National Academy of Sciences.

And, according to the study, beef produces six times as much water-polluting nitrogen, requires 11 times the water and uses 28 times the amount of land.

While blame is often put on cow flatulence, the issue is more accurately cow burps. The animals burp up methane in large doses—much more significantly than other farm animals. Methane is one of the most potent greenhouse gases responsible for global warming. It’s significantly more damaging than carbon dioxide.

Another issue that puts cows at the forefront of the global warming issues is their massive size. Cows are large animals by nature and that means it takes more time, food and water to help them reach market size. This makes them a less efficient protein compared with smaller animals and plants.

As expected, the response from the National Cattlemen’s Beef Association, called the study “a gross oversimplification of the complex systems that make up the beef value chain.” A spokesperson for the group told USA Today that the beef industry has made improvements to its sustainability efforts and that the U.S. “produces beef with the lowest greenhouse gas emissions of any country.”

But according to the study, that just isn’t the case.

The study is the most comprehensive to date to look at the global warming impact from meat, eggs and dairy. “In the study, pork, poultry, dairy and eggs all had comparable environmental footprints, so close there were no statistically significant differences among them,” reports USA Today. “But cows were off-the-chart different,” Eshel noted.