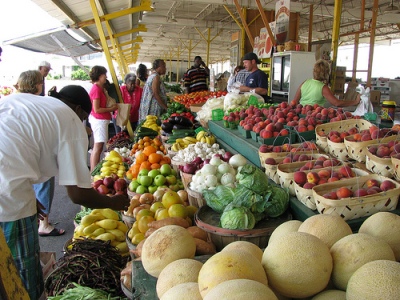 Florida’s new “Buy Local Orlando” initiative, set to launch May 1, conjures up pleasing images of farmer’s market produce and goods hand-crafted by local artisans.  With the words “buy local” in the program’s title, it makes sense to assume that the participating merchants are locally-based. The widespread locavore movement, after all, is just that: local.

But Orlando’s local program is anything but. The first tip-off? It’s launched in conjunction with the Disney Entrepreneur Center. Not exactly the name that comes to mind when you think of supporting local businesses. But then again, neither is McDonald’s — but according to “Buy Local Orlando” program guidelines, the fast food chain qualifies as a local merchant.

So if McDonald’s is classified as local according to city standards, who isn’t? A backyard farmer selling his produce on the street corner, that’s whom. Last I checked, he isn’t going to have a “current city-issued tax business tax receipt number”, which is what it takes to be participate in “Buy Local Orlando”.

Participating businesses are also required pay the city $49 per fiscal year to participate — $99 if the application is submitted after May 1st. In return, merchants –who will offer discounts to consumers carrying a “Buy Local” card– are given free promotional materials as well as access to events at the Disney Entrepreneur Center.

Orlando Mayor Buddy Dyer, who founded the program with Disney, “wanted to look at what it could do on a local basis.”   By local basis, it is clear that he means the local tax base, not the local laborer.

Image via Natalie Maynor on Flickr under a Creative Commons License

Leave a Reply to The City of Orlando’s “Buy Anything that Generates Sales Tax” Campaign « ourlando, locally made Cancel reply