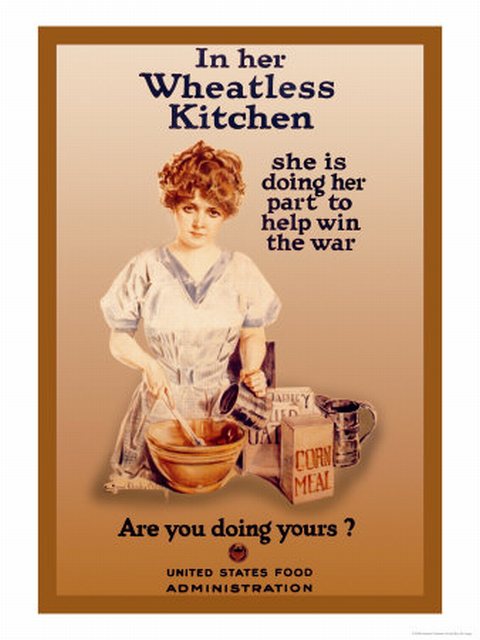 Wheatless Wednesday, along with her currently more popular cousin Meatless Monday, were the brainchild of Herbert Hoover during World War I.  Already active as a food relief administrator in Europe, Hoover was appointed to preside over the U.S. Food Administration in 1917, just before the United States entered the First World War.  It would be twelve more years before Hoover was inaugurated as the 31st president of the United States, but by that time he was already a household name.

Hoover’s massive food preservation program encouraged Americans to reduce food consumption so that the food supply for the troops and war-torn Europeans would remain strong.  The uniqueness of his plan– as opposed to later World War II efforts — was that Hoover’s program avoided rationing, while still successfully reducing American food consumption by 15%.

In the current economic times, many of us are seeking ways to cut grocery costs. While we might not jump at the idea of following the complicated Hoover schedule shown below, your wallet will thank you when it comes time to pay for that shortened grocery list.

To begin, let’s take a look at a recipe for a meal idea that’s not only wheatless, it’s also gluten-free, dairy-free, corn-free, and meat-free.  In a word, vegan. Herbert Hoover would be proud.

Bring salted water to boil in saucepan. Boil potato, carrots and radishes until soft when pierced with fork. While vegetables are boiling, combine the following:

Roast these spices in a hot, dry cast iron skillet until aromatic. Meanwhile, prepare the following:

At this point, check the boiling potato mixture. If the vegetables are soft enough, drain them thoroughly and then mash to a coarse consistency. Combine the spice mixture and the onion mixture together with the mashed vegetables.

Heat your oil of choice in large frying-pan over medium heat. While the oil is heating, prepare this simple batter.

Whisk the flour and milk together.

With your clean, washed hands, take approximately 1/4 cup of the vegetable mixture and form into a small patty. Dip this patty in the batter.  You will need to lift the patty out of the mixture immediately after submersing it, as it tends to fall apart before it’s cooked.

Place each patty in the hot pan directly after coating it with batter. Cook the patties for several minutes on each side, until pleasantly browned. Keep warm in the oven while you prepare the remaining patties.