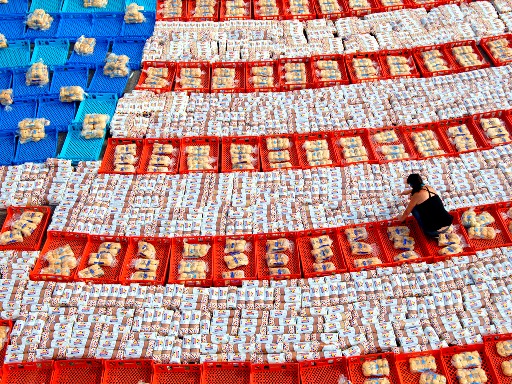 Over the course of a lifetime, the average American consumes over 87,000 slices of bread.  Yes, you read that correctly — eighty seven thousand. That’s more than a loaf per week per person, not counting the additional 5,000 hot dog buns and 12,000 hamburger buns each American devours in his or her life.

All that wheat calculates out to a lifetime grand total of 21,947 loaves and buns.  The National Geographic Society’s Human Footprint project has illustrated this shocking bread obsession in a stunning visual (see the video clip below).   In the words of my little brother, who is no stranger to wheatless ways,  “That is a totally nasty amount of bread.”

There’s no argument that bread is an American staple.  Amber waves of grain are, after all, an American icon.  But we can’t live by bread alone.  So what are some wheatless alternatives?

Before you reach for loaf of wheat-flour bread, think again. Here are some healthy, wheatless sides to keep you away from that 87,000 slice average.

White Potatoes: The average American will consume 20,000 potatoes in his or her lifetime. But why not? Potatoes are satisfyingly filling, and are packed with fiber, vitamin C, manganese and potassium. And there are countless versatile ways to prepare them, from baked to mashed to latkes. Just stay away from the fried ones.

Rice: This one is a no-brainer, since so much of the world population’s diet is based on rice.  When combined with a legume, whole grain brown rice forms a complete protein providing the body with necessary amino acids. Lundberg Family Farms is a Sacramento-based rice producer which offers certified organic and eco farmed varieties of rice.  You can read about their sustainabity practices here. Also, since Lundberg rice is packaged in a dedicated facility, there are no worries about cross-contamination.

Millet is a fantastic, overlooked gluten-free source of magnanese, tryptophan, magnesium and phosphorus.  While it is technically a seed, it is usually prepared as a grain that can be eaten in place of rice.  And did you know that sprouted millet and cashews can be used to make vegan yogurt?

If you’re sticking to whole foods and staying away from the wheat, but still itching to reach for a slice of bread, there’s good news.  There are an abundance of wheat-free breads on the market that don’t use refined flour.  Made from sprouted whole grains, these breads are better for you than the processed flour kind. Look for breads made from sprouted kamut, spelt, barley and rye in your health food market or local co-op — brands vary depending on where in the country you live.

For those with celiac disease or gluten-intolerance though, there’s a catch.  The grains most often used in sprouted breads — kamut, spelt, barley and rye — aren’t gluten-free. In fact, I have yet to find a wheat-free sprouted grain bread that is also gluten-free.  But don’t despair.  This doesn’t mean gluten-free breads don’t exist.  Companies like Food for Life and Ener-G offer a wide selection of delicious gluten-free breads made from rice and tapioca flours. And don’t forget all the variations of baked goods you can create using your own wheat-free, gluten-free flour blend.

So, this Wheatless Wednesday, think twice before you reach for one of the 21,947 loaves and buns you are expected to consume. Instead, think back to the best things before sliced bread. Your body will thank you.

Image courtesy of Roy Gumpel for the National Geographic Society