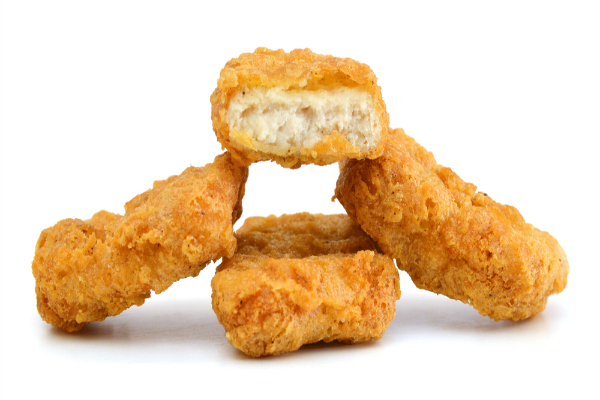 Doctors at the University of Mississippi Medical Center set out to determine the nutritional content of fast food chicken nuggets. I’m not sure you want to know what they discovered.

What lead them to wonder what’s actually in a fast food chicken nugget (as so many of us have?):

Chicken nuggets have become a major component of the American diet. We sought to determine the current composition of this highly processed food.

So with this in mind the team randomly selected nuggets from two different national fast food chains. They fixed the nuggets in formalin (a solution of formaldehyde in water, used to preserve biological specimens), sectioned them and stained them for microscopic analysis. What did they find?

They found that, as so many of us have suspected, that most of the “chicken” is not actually chicken meat. What is it? Mostly fat, connective tissue and other very unappetizing stuff:

Striated muscle (chicken meat) was not the predominate component in either nugget. Fat was present in equal or greater quantities along with epithelium (animal tissue covering the external and internal surfaces of the body), bone, nerve, and connective tissue.

Chicken nuggets are mostly fat, and their name is a misnomer.