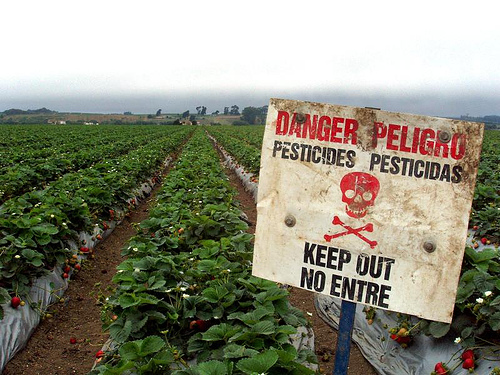 You’ve likely heard of Skin Deep, the cosmetic safety database which lists the toxicity of ingredients in personal care products.  But did you know there is now a similar database for food?

What’s On My Food, a brand-new searchable database launched yesterday by the Pesticide Action Network, will give you the inside scoop on exactly what chemicals are on the food you eat.  With just a click of the mouse, you can view the toxicology risk and known pesticide residues on everything from almonds to oats to winter squash .

For instance,  did you know 82% of conventional applesauce contains Carbendazim, an endocrine disruptor known to cause tumors in rats and ranked by Friends for Earth as one of the “Filthy Four” pesticides? Suddenly organic applesauce doesn’t seem quite so expensive, and the thought of making it at home doesn’t seem nearly as daunting.

The helpful — if not somewhat disturbing — website details each pesticide’s risk to human health by placing each chemical in one of the following toxicological categories:

Data used to compile this database was gathered from the EPA’s Pesticide Reregistration Decisions, the Pesticide Info Database, and the USDA’s Pesticide Data Program.

Image via Jekrub on Flickr under a Creative Commons License