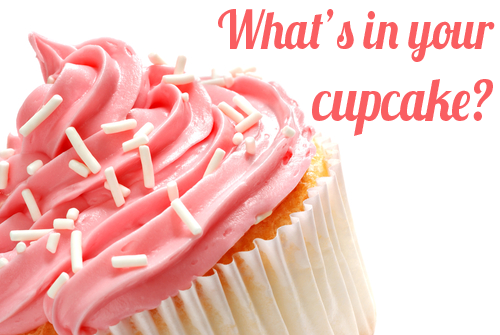 The TSA has ruled cupcakes are not a danger to the skies, but the number one cause of death for Central American men is attributed to conditions in sugar harvesting, and Norway’s recent butter crisis has bred a new type of criminal: the Butter Smuggler.

Want to know more about what’s in your cupcake? The kind folks over at Frugal Dad have dissected a standard cupcake recipe to share some facts about what’s really in those cupcakes. Some are shocking and some are silly, and the whole thing is just plain fascinating. Check it:

Of course, if you opt for making vegan cupcakes, you can at least skip the eggs and milk in favor of less dicey ingredients. You can substitute 1 tablespoon of flax meal whisked with 1/4 cup water for 1 egg in a cupcake recipe, and replace the milk and butter with non-dairy substitutes.