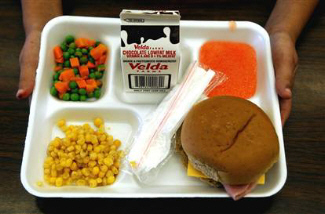 Much of the press surrounding efforts to improve school lunches focuses on resistance from junk food-addled children who like their potatoes with partially-hydrogenated oil and their fruit juice incased in gelatin and xanthan gum. TV shows like Jamie’s School Dinners show picky children gagging at the sight of tomatoes, spitting out pieces of lettuce. This makes for excellent TV, but is it really accurate?

The Mercury News – a local Silicon Valley newspaper – recently reported the popularity of healthy cafeteria menus with the schools’ students. In fact, school lunch participation has gone up in the two school districts (Los Gatos and Saratoga Union School Districts) that have teamed up with Revolution Foods – a school catering company that sources local foods, uses 85% organic ingredients, and teams up with Whole Foods to broaden their purchasing options.

Since the switch, students have commended the changes, saying that they feel better when they eat healthy foods. While Northern California is known for its enlightened attitudes towards eating, these schools are in communities with documented obesity problems. These are not officially considered pilot programs, but we should showcase them as such: if they can do it, any school district can do it.

Across the country, Pennsylvania students chose healthier options when nutrition information was showcased along with the buffet-style trays of food. This 2005 experiment was courtesy of a research team from Penn State University and has been held up as an indication that, contrary to popular belief, children and adolescents do want to eat what’s healthy, as long as it is convenient and available to them.

Given the partnership between private suppliers and school districts, perhaps a proliferation of such catering companies would encourage more school districts to wrench themselves from the jaws of Pepsi Co et al. In this rare instance, supply might inform demand.

(Photo by Peter Cosgrove for AP)