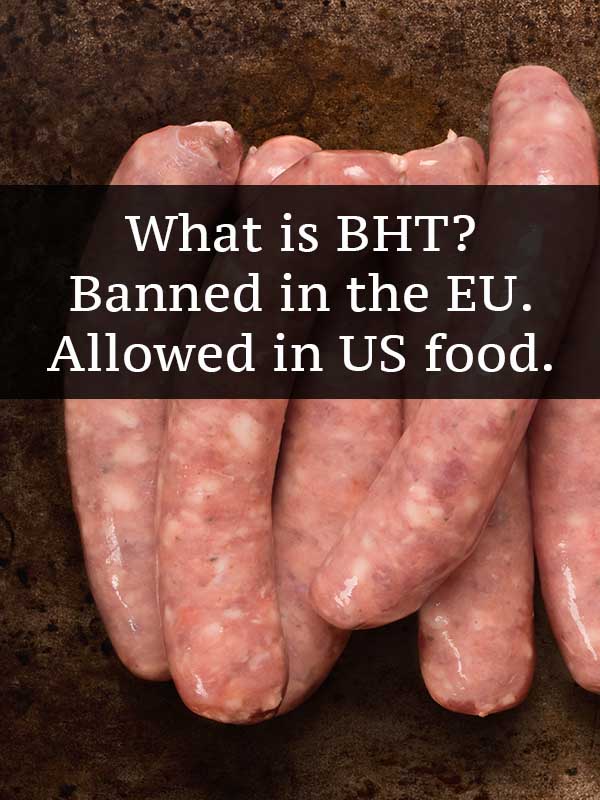 What is BHT, and why is it still allowed as a food additive in the US, when it’s banned in the EU?

Before we get into what BHT is, listen to this important Green Divas myEARTH360 report featuring health and environmental journalist, Alison Rose Levy, who wrote this article. She connects the dots between the Citizens United decision, Fast Track legislation, and some dirty back room trade deals. Then read on to learn about BHT and how it’s related to the Fast Track legislation… and please take action at the end!

A speaker at an event I recently attended asked why U.S. food companies put butylated hydroxyltoluene, a food preservative and endocrine disruptor, in cereal sold stateside, while in Europe the same companies formulate the same product without BHT.

There are three answers to that question:

The precautionary principle is an approach to risk management which places the burden of proof to demonstrate a product or ingredient’s safety on the corporations that produces the product—prior to releasing it to the public.

Over the last few decades, the U.S. has become lax with this approach while Europe proceeds with a greater amount of caution. But that contrast may not survive efforts by the U.S. Trade Representative Michael Froman and multinational corporations, which are currently negotiating super trade treaties behind closed doors.

Such treaties are enacted by Congress through what’s known as “fast-track” legislation, meaning that the President negotiates trade agreements and Congress can only approve or disapprove, but cannot amend or filibuster the legislation.

According to sources at the negotiations of these treaties, the provisions in them may well eradicate the EU’s higher standards. Instead of getting the BHT and other questionable additives out of American products, the negotiated language will likely “harmonize barriers to trade,” meaning corporations can put all the bad stuff in European products that they can’t now.

Many Europeans vehemently oppose such trade deals because the mainstream media is extensively covering them. Here in the U.S., however, there’s pretty much a coverage blackout except for MSNBC’sThe Ed Show.

Despite leaks, side conversations and Wikileaks revelations that have given experts the opportunity to assess the deals, the American media and public don’t seem too concerned about the outcome. But important questions remain. Let’s begin with the obvious: Why are these deals secret? And why should ordinary citizens go along and trust that the secret handshake devised by corporations will serve the greater public good?

To borrow a phrase from the GMO labeling movement, we need to safeguard the public’s right to know. It doesn’t matter whether we’re talking about secret trade deals or the contents of food, shampoo, building products, industrial emissions, knowledge protects us.

Is knowledge a barrier to trade?

While the most visible proponents of labeling are groups, like the Organic Consumers Organization, Food Democracy Now!, and Just Label It! which call for mandatory labeling of GMO-containing foods, GMOs are not the only food ingredients some people would like to see labeled in food. A small sample of others include:

It doesn’t end with food

Women purchasing cosmetics or face creams want to know whether they contain methyl parabens which studies find concentrated in cancerous tumors. Parents buying their children’s car seats or nursing pillows want assurances that these products don’t contain toxic flame retardants. Homeowners and office dwellers want to know if their building materials and furnishings contain toxins like phthalates, which are associated with damage to the liver, thyroid and reproductive system.

And let’s not forget the chemicals used in fracking, emissions from manufacturing plants and gas pipeline infrastructures, methane and carbon dioxide releases contributing to climate change, and nuclear waste.

Whether it’s consumer goods, building materials, or the energy industries, toxic outputs need to be monitored for health and environmental impacts. That’s impossible to do without the right to know what they contain, emit or produce. The only way to track them is through product labeling.

From the perspective of corporations, the less the public knows about what their products contain or emit, the better. When knowledge deters people from a product or process, the industry considers that knowledge a barrier to trade. And the new uber-trade deals, the Trans Pacific Partnership (TPP) and Trans Atlantic Trade and Investment Partnership (TTIP) are poised to be fast-tracked through Congress with a quick up or down vote, even before the treaties’ contents are made known to Congress or the public.

“Big chemical companies, pesticide manufacturers, the manufacturers of products which are associated with cancer, autism, learning disabilities in children, and a host of other serious illnesses are attempting to use these trade regulations to stop government regulations of dangerous chemicals all around the globe,” says William Waren, senior trade analyst with Friends of the Earth.

“When we can’t adequately quantify risk, the burden of proof is on the party that would introduce a potentially risky product to show that the risk is low enough to avoid harm public health and the environment,” he continues.

When the precautionary principle is dismantled, as it is in U.S. policy, companies make it the public’s responsibility to show harm. Unless people go to extraordinary lengths to demonstrate a safety problem, corporations have no responsibility to guarantee safety.

Current federal regulations are riddled with loopholes due to four decades of industry lobbying and legal opposition to proper safeguards. Efforts by major coalitions like Safer Chemicals, Healthy Families have been stalled.

In the void left by our nation’s failure to regulate, some states, such as California, have taken it upon themselves to regulate toxic chemicals. The California Environmental Quality Act requires that “no projects which would cause significant environmental effects should be approved as proposed if there are feasible alternatives or mitigation measures that would lessen those effects,” and “environmental impact reports shall be used to provide full public disclosure of the environmental impacts of a proposed project.”

“It’s incremental but it’s real important, given the incapacity of the EPA to act,” notes Waren.

Waren says that the “Technical Barriers to Trade” chapters in treaties would also enact stringent limits on all governments, rolling back product safety regulations in Europe and elsewhere and freeze in place the current ineffective U.S. federal regulations. In addition, state regulations would be rolled back or nullified.

Europeans would have to eat their BHT and like it. No longer able to study health or environmental impacts, under threat of lawsuits by international trade tribunals, Californians would not be empowered to prevent fracking companies from dumping fracking waste into water aquifers—as recently occurred in Central Valley, California.

“This is one of the leading negotiating points for the U.S. and they are making a lot of headway,” says Waren. “The whole question of rolling back state and local safeguards on food and the environment is a very, very important one because a lot of states have already acted in various ways, like New York which banned fracking.”

Tell Congress: Don’t betray democracy! No “Fast Track” for the TPP at FastTrack.com.

Republished with permission from The Green Divas; image via Shutterstock.