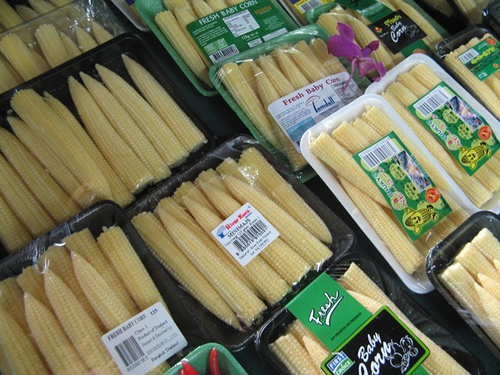 No longer an Asian delicacy

What was once considered a strictly Asian food is now becoming more mainstream in the west.

It does not require all that special of growing conditions and can be grown anywhere corn can be grown. It can also be grown in slightly colder climates where mature corn cannot because the time until harvest is not as long.

Even though it is delicious, it is often an import, racking up those food miles. In the UK, ours comes primarily from Thailand and India. However, it seems that growing it more locally may catch on the US.

Where to use it

Baby corn is great. It tastes slightly like corn, but less strongly, and it has a pleasantly crunchy texture. Because it has a rough texture, any sauce you put on it sticks really well, making the dishes very flavorful.

My personal favorite is using baby corn plus whatever other vegetables with teriyaki sauce over jasmine rice.

It is also great in curries and as a dipping vegetable in something like hummus.

I was surprised to see that baby corn actually had some nutritional value. It is quite low in calories, about 6 calories per ear; however it is a rather significant source of vitamin C and iron, a single ear having about 20% and 8% of the daily recommend intake, respectively.