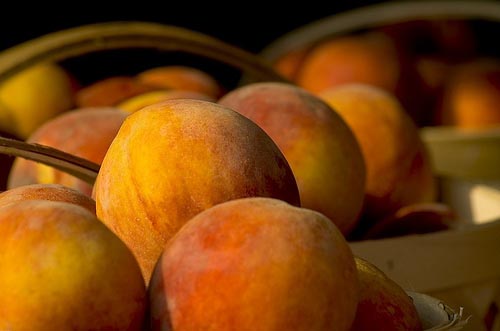 One issue that’s come to my attention since I started thinking more about my food is the debate about organic foods — are they healthier, and is the cost worth the potential benefits?

I’d love to buy organic food all the time, but it’s just not financially possible for me right now. That said, I believe in the health risks of pesticides on foods and would like to start moving in the direction of eating foods grown without them. But if I’m going to get a bang for my buck, which foods should I buy organic in order to protect myself from ingesting the most pesticides? Are some fruits and vegetables more susceptible to absorbing pesticides than others?

One list I found that can help answer this question is the Shopper’s Guide to Pesticides, which ranks 47 popular fruits and vegetables based on how many pesticides they contain, often after being washed and peeled. The list was put together by the Environmental Working Group, a non-profit group working on public health and the environment.

The most contaminated fruit or vegetable is peaches, followed closely by apples, sweet bell peppers, celery, and nectarines. Rounding out the top 12 are strawberries, cherries, kale, lettuce, imported grapes, carrots, and pears. According to EWG, eating any of these top 12 most contaminated fruits and vegetables could expose a person to, on average, 10 pesticides in a single day.

The list was compiled based on an analysis of about 87,000 tests for pesticides conducted between 2000 and 2007 by the USDA and the FDA. The studies used six measures for contamination which included criteria like percent of samples with detectable pesticides and the average number of pesticides on a sample. Using the criteria, the fruits and vegetables were then ranked to create the guide for shoppers.

The point of this study is not to assess pesticide risk or to comment on the debate about whether organic food are healthier (or just as healthy as non-organic foods). Instead, the study aims to:

give consumers the information they need to make choices to reduce pesticides in their diets. In this spirit, the Guide does not present a complex assessment of pesticide risks, but instead simply reflects the overall load of pesticides found on commonly eaten fruits and vegetables.

So if you are trying to eat organic for health reasons but can’t afford to buy all foods organic, this list can help make those decisions easier. It probably makes more sense to invest in organic apples over organic avocados or onions (the “cleanest” vegetables, according to the list), because non-organic apples will probably contain more pesticides than non-organic avocados and onions.

Other tools for making decisions about organic versus non-organic include the Gorgeously Green Survival Guide for the iPhone; What’s On My Food, a searchable database to find out what chemicals are on the food you eat; and a food calculator from Organic Valley.

Image credit: ellievanhoutte on Flickr under a Creative Commons license