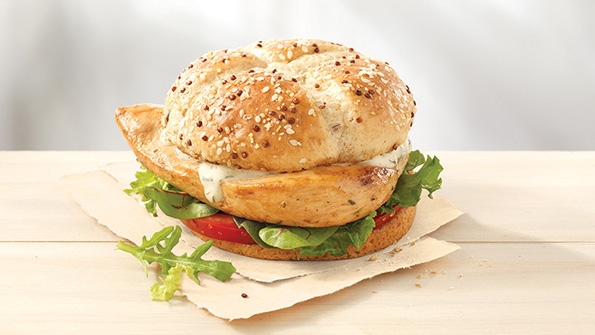 Last week, Wendy’s announced that it had begun to testing new menu items made from antibiotic-free chicken. If you’re lucky enough to live in one of their first four test four markets — Orlando, Gainesville, Kansas City and Austin — you should already be able to try a Wendy’s grilled chicken raised without any antibiotics.

The test follows several other initiatives in the fast food space and the broader food industry to cut down on the use of antibiotics in the food supply. Fortune Magazine recently wrote how antibiotics in meat is a public health controversy that isn’t going away. And, consumer watchdog NRDC issued a report [pdf] calling the fast food industry’s shift toward antibiotic-free chicken as having gone “mainstream”:

Earlier this year I wrote about U.S. PIRG, a national consumer group and their efforts to convince fast food restaurants to stop buying meat with critical antibiotics. They were sounding the alert after a then newly released report from the FDA showed that antibiotics for use in meat increased by 20% [pdf] between 2009 and 2013. As noted then, agricultural overuse of antibiotics poses serious risks to public health, in terms of facilitating emergence of antibiotic-resistant bacteria and ‘superbugs’ and the links to obesity.

U.S. PIRG noted that several big food companies and chains — Panera, Perdue, Chipotle, McDonald’s — are listening to consumers by eliminating antibiotics in meat they serve. Just a few months ago, McDonald’s agreed to phase out the routine use of antibiotics in their chicken. Last year, chicken chain Chick-fil-A said it was working with suppliers to remove all antibiotics from its chicken supply within five years. And, just around the time of the FDA report, Tyson, the nation’s biggest chicken producer and supplier of McNuggets, agreed to ditch antibiotics.

Its worth noting, however, that Wendy’s has yet to fully commit to phasing in the use of antibiotic-free chicken in the way Panera, Chipotle and McDonald’s have. The company has stated that “customers’ response to the new chicken products will determine whether it shifts more of its chicken offerings toward poultry raised without the drugs.”

While there is much work to be done on this front, it all looks like progress to me.