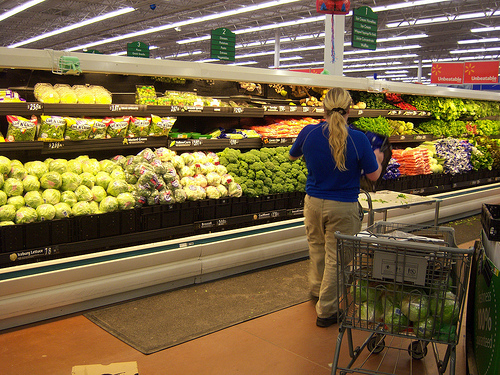 Wal-Mart recently announced that it will be focusing more on local food. Will this be good or bad for local economies?

If you’re anything like me, you’re pretty skeptical of any move that Wal-Mart makes. When a friend sent me an article recently about the retail giant “going local,” my first reaction was confusion followed quickly by good, old-fashioned skepticism and a few  questions.

One of my favorite teachers of all time, Mr. Ivey, taught us that when faced with a decision that causes this much inner turmoil, a PMI is a really helpful tool. Nope, not private mortgage insurance. Mr. Ivey’s PMI stood for Plus, Minus, and Interesting. Basically, he was a fan of divvying up what you know into those three categories, where Interesting facts are ones you don’t really consider a Plus or Minus. Here’s a PMI laying out what I know about Wal-Mart’s local food initiative:

Wal-Mart’s whole local food scheme grew out of a plan to save on fuel costs. Since they were sending whole fleets of trucks all over the country, it just made sense to move more product while they had trucks in the area. For a fleet of trucks the size of Wal-Mart’s, using fuel more efficiently is definitely a plus. According to a company press release, they saved over 122,000 gallons in diesel fuel in 2008 alone (pdf) through their local food program.

They began adding stops at local farms on the way to their supercenter stores, which The Atlantic points out, often serve as grocery stores in “food desert” areas. This one’s feeling like a plus, right? We want folks to have access to fresh, local produce.

The other plus also comes from that article in The Atlantic, where they did a blind taste test comparing Wal-Mart’s local produce to Whole Foods’. Expert foodies chose Wal-Mart’ produce over Whole Foods’ in a number of instances, which was really surprising.

The first minus that came to mind is a concern about how this is going to effect farmers. Wal-Mart is notorious for forcing suppliers to lower prices by any means necessary. Why should we expect them to behave differently here?

Wal-Mart defines local as within the same state, which in a place like California can mean hundreds of miles. That’s not exactly the sort of local that locavores had in mind. A store like Whole Foods defines local as food that travels less than a day to its destination, and at the farmers market, food miles get considerably shorter dropping below 100 miles in most cases.

The meat situation at Wal-Mart sounds like it’s still pretty pitiful. When shopping for the blind taste test, The Atlantic’s Corby Kummer was only able to find “broth enhanced” chicken from what he described as “questionable” sources. One of the upsides to really buying local food is finding meat from farmers who ethically raise their animals. Does that Tyson brand chicken breast cancel out the local broccoli that you bought to serve alongside it?

Wal-Mart is the world’s largest retailer, serving 14 countries and counting. They have over 175 million customers per week worldwide and did over $400 billion in sales last year.

I spoke with Duane Marcus, a small farmer in the Atlanta area about Wal-Mart’s local food program, and he made a couple of interesting points. Here’s what he had to say:

Duane: From my point of view whatever they do has no impact on my business because my customers would never shop there anyway.

What I am seeing is that through their green initiatives they are swaying people who should know better that they are doing something good. The same people who decried their destruction of small town local businesses.

Duane: Total BS. Furthering their stranglehold on local economies would be more accurate.

So, what do you guys think? Does Wal-Mart get a back pat, or are the negatives just too much? I’d love to hear from some more farmers on this one!