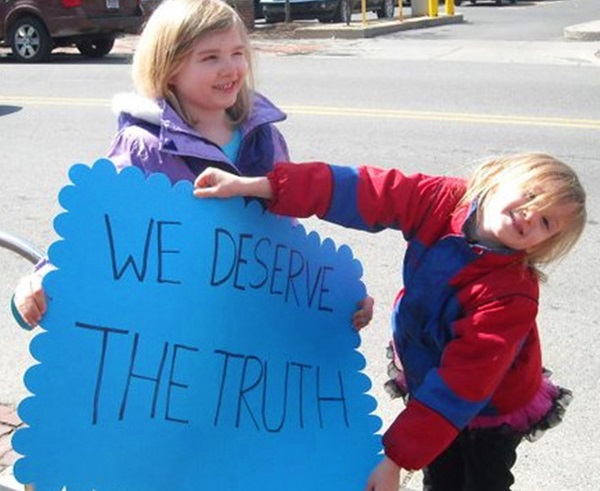 The VT labeling bill, also known as H.122, would require labels for all food products made wholly or partly from genetically modified ingredients. It passed the House Agricultural Committee by an 8-3 vote last Friday, and looks all set to move forward.

The House  Agriculture Committee approved a GMO labeling bill both last spring and  again on Friday. But last year’s action came late enough in the session that the legislation didn’t have time to get a vote in the full House or be acted on in the Senate.

Andrea Stander, executive director of  the Rural Vermont farm advocacy group, says this year’s earlier  completion of the Agriculture Committee’s work means the measure should  have a good chance of making it the rest of the way through the process.

In April of 2012, Monsanto threatened to sue the state of Vermont if a GMO labeling bill became law. Vermont caved, despite overwhelming support for the labeling bill from bipartisan legislators and those who put them into office.

Four separate polls showed that over 90% of VT residents wanted GMO labeling, when legislation was first introduced in 2012; but Monsanto’s deep pockets, litigious nature, and political clout overwhelmed the state’s legislative process and the bill was never allowed to come to a full House vote:

From the Addison Independent yesterday:

Testifying before the House Agriculture Committee earlier this month, Assistant Attorney Gen. Bridget Asay told lawmakers that there was a substantial likelihood that biotech companies would sue the state over the legislation. The outcome of those lawsuits, she said, would be extremely uncertain. If the state loses, it is at risk of having to use taxpayer money to pay the bill for the opposition’s lawyers…

To win a lawsuit, the state would likely have to prove that it had an interest in protecting its citizens’ health by mandating labels. Otherwise, companies could claim that mandatory labeling violated their First Amendment rights.

[Rep. Will Stevens, a member of the House Agriculture Committee] says that there is an understanding that the state would get sued if the legislation were to pass, as biotech giant Monsanto promised to do when similar bills were under consideration last year. But H.112’s supporters say that this bill is designed to be defensible against lawsuits.

There are many (pro-health, pro-citizen, pro-environment, pro-democracy-vs-corporate-oligarcy, as well as many economic) reasons people might wish to avoid supporting or ingesting GMO products — each, separately, provides compelling argument in favor of mandatory labeling, to give consumers the freedom to choose what they will or won’t buy.

For an in-depth look at all of those reasons, read here:

There is one and only one core argument against labeling GMO foods, underlying all others spouted by biotech profitteers: the industry that makes those products knows consumers don’t want them, and wouldn’t buy them given a fair choice.

The First Ammendment was created to protect the rights of US citizens — not to enable global megacorporations to tell ‘we the people’ whatever stories best fluff their bottom line.

Industry’s bazillion-dollar PR campaign to defeat CA’s Prop 37 labeling initiative seems to have backfired, lighting fires of awareness and activism on GMO labeling around the country. Current and future efforts towards transparency in GMO regulation bear close watching, in VT and everywhere else they emerge.

The GMO labeling issue, in Vermont and in every state that tackles it, is at heart a contest for the reins of our republic. Will our laws serve the public good? Or will they merely serve as industry-engineered stratagems for slaking infinite corporate greed, at the expense of actual citizens?

I didn’t vote for Monsanto to set state law, about food labeling or anything else — and neither did anyone reading these words.

To get involved in working towards sane GMO labeling laws, contact Vermont Right To Know GMOs if you’re in that region, or Just Label It to find opportunities where you live; then join GMO Free USA.

…Public good, please and thank you!