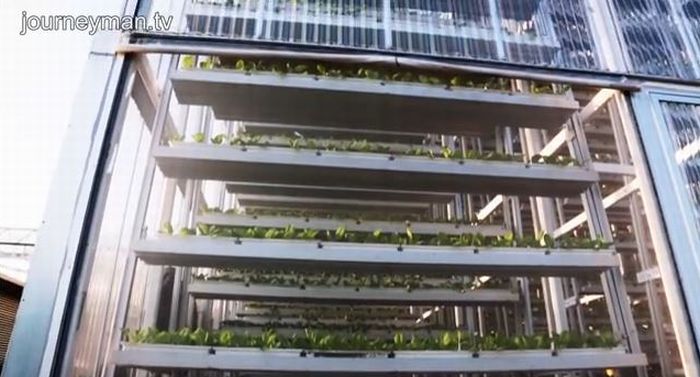 Vertical farming in Singapore reaches new heights with the success of SkyGreens.

Singapore is a city on a small island where more than five million people live. But the island has only about six hundred hectares of arable land. 90% of Singapore’s food is imported from other countries, mainly Malaysia, Brazil, and Australia.

A main focus of Singapore’s Agri-Food and Veterinary Authority (AVA) is the diversification of the food supply. The AVA has many programs to encourage safe food imports from a variety of countries. They also have a program called the Food Fund.

The Food Fund encourages research and development into ways to improve local farming techniques. Their goal is to increase the percentage of local foods people eat. The overall goal is to have 10-20% of the food Singaporeans eat grown locally. Three specific goals are to have 30% of the eggs, 15% of the fish, and 10% of the leafy greens people buy produced in Singapore.

SkyGreens has found a way to produce greens on significantly less land and at one-quarter of the cost of conventional farming. The vertical farming enterprise grows vegetables in four-story transparent towers. The vegetables grow in trays on a loop powered by gravity-fed water wheels that takes them from the nutrient filled water at the bottom to the sunlight at the top and back down again. The vertical farming system uses less water than conventional farming and the electricity to run the entire operation is about $3 per month.

Vertical farming has been around a long time, but it’s just now getting popular because of the concentration of people in cities; because of environmental pressures, such as diminishing aquifers; and because of cost savings. Vertical farming ranges from small “living walls” to full-scale farms, such as SkyGreens. Local foods also have their own appeal, not just in the United States, but around the world.

This video from Journeyman Pictures shows SkyGreens and their vertical farming methods. The video is about seven minutes long.