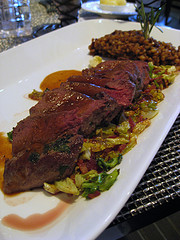 Since I can rarely afford non-industrial meat, I eat mostly vegetarian. But in December, I moved back to Missouri to live with my boyfriend, who is definitely a meat-and-potatoes kind of guy. Luckily for me, my boyfriend shot three deer this past fall, so we’ve both been happy eaters.

Deer numbers are at historic highs and large deer populations are well-documented to wreak havoc on ecosystems. So, not only is venison a sustainable meat, but eating venison can actually help the environment.

Venison is also an extremely lean meat, with a more delicate texture than beef. Although some people complain that venison tastes “gamey,” I have found that venison only takes on a gamey flavor if cooked improperly.

Here are a few tips on how to cook venison:

1) Choosing a recipe – Use venison in any recipe that calls for beef.

2) Marinate – Marinating tenderizes the venison.  Here are two of my favorites:

3) Lean meatballs – Since deer meat is so lean, venison meatballs can be tricky. But when done properly, venison makes delicious, delicate meatballs. Most people cut ground deer meat with high-fat ground beef or ground pork, but I like to keep my sustainable meat sustainable. So, instead of cutting the meat, I add a little grated cheese (I like a hard sheep’s cheese) and some panko (whole-wheat works well) to ensure that my meatballs with hold together.

Then, handle the meatballs with care. Make sure your meat is very cold when you combine ingredients. Wet your fingers in a bowl of cold water before you form each meatball. Put meatballs on a baking sheet lined with plastic wrap and chill them in the fridge before you add them to your dish. Gently submerge the meatballs in your sauce or stew. Venison meatballs work best in dishes that can be finished in the oven instead of being stirred on the stove-top. For a great recipe to use venison in lieu of beef, see Moroccan Beef Meatball Tagine (add 1/2 cup of finely grated cheese to the meatball recipe).

(Image courtesy of Sifu Renka via a Creative Commons license.)