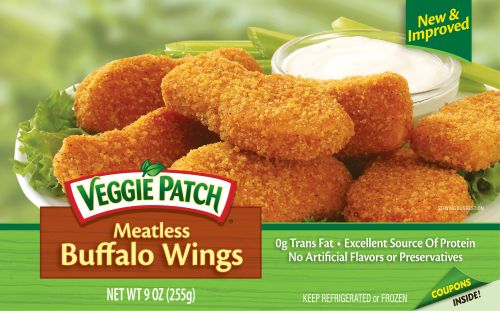 With the Super Bowl coming up, I’ve been looking for something different to serve. When I received an offer of free Veggie Patch Meatless Buffalo Wings and Veggie Patch Meatless Corn Dogs, I couldn’t pass it up.  Both products are vegetarian (but not vegan), trans fat free, and use non-GMO soybeans.

I recommend the corn dogs and I’ll buy them and serve them again. I thought the buffalo wings were okay, but not everyone agreed with me, so I might serve them again, but I might not.

Veggie Patch Meatless Buffalo Wings tasted okay. The promised “heat” felt more like an extra dose of black pepper than the chile pepper fruity spiciness I was hoping for. While the ingredient list has paprika in the breading, I didn’t get any of the sweetness that I usually taste with paprika. The interior of the wings was almost flavorless.

Unfortunately, the biggest drawback is that they failed the kid test. She didn’t like the interior texture. It was “too smooth”. I agree that it was smooth, but I didn’t think that was necessarily bad.

It sounds like I’m complaining a lot about these, but I did like them. They crisped up after about eight minutes in the oven and the texture and flavor of the breading was quite good. They go well with the usual dipping sauces and once the sauce is on the buffalo wing, do we really taste the interior all that much?

Serving size on the package is four wings and that seems like a reasonable amount to me. Four wings is 200 calories, 8 grams fat (1 g saturated fat), 11 grams protein, 3 grams dietary fiber, and 540 mg sodium. 20% of the recommended daily allowance of calcium is not bad.

The breading left a little to be desired – I’m used to a very yellow cornbread around my dogs, but that may be a regional thing. The breading tasted to me like a white bread. The ingredients list shows wheat flour before corn flour and further down the list of ingredients is breadcrumbs made from more wheat flour. But still, I liked the little corn dogs and I’m going to serve them at my Super Bowl party.

The Meatless Corn Dogs were a two or three bite treat. (My husband thought they were a single bite each. Your mileage may vary.) Served with a dipping sauce like mustard or ketchup, these make an excellent snack or hors d’oeuvre.

As far as healthy eating goes, both products are pretty good.  They’re filling for a fairly low number of calories and the protein amount is higher than most snack foods.  The sodium count would keep them off a school lunch menu, but as an occasional food, they can fit in with a healthy eating plan.