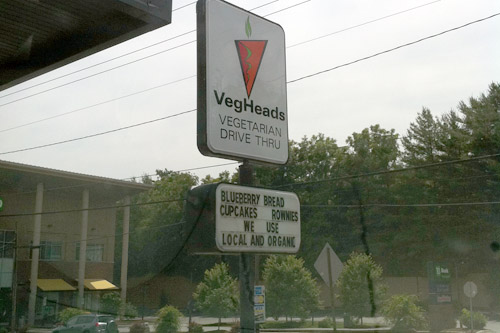 I’d heard folks talking about a fabled vegetarian drive thru in Asheville, so when my husband and I headed up there to visit his sister and her family, we decided to check it out.

VegHeads vegetarian drive thru occupies an old burger joint close to downtown Asheville. Not only is all of their food vegetarian, they focus on organic ingredients and source locally when they can. All of their soy products are organic, which is a big one for me, since non-organic soy is usually genetically modified.

I was pretty hungry when we rolled into town, so the vegetarian drive thru was our first stop! The problem I had, which I always have at veg*n places, was deciding what to order! I’m so used to scanning the menu for what I can order, it’s a little overwhelming to have so many choices! Tough life.

We picked up some goodies to munch in the hotel. Here’s what we ordered:

The cheese steak was phenomenal! Loaded with seitan, peppers, onions, and vegan cheese (it tasted like Follow Your Heart to me), it totally hit the spot. The slaw I ordered on the side was a delicious alternative to your usual drive thru fare. An oil and vinegar slaw, it was full of healthy cabbage, carrots, and sesame seeds. YUM!

My husband wasn’t crazy about his Veggie Pile, and I think part of the problem was that he was expecting a veggie burger, but instead it was more like a veggie sandwich. It also had cheese on it, which looked like it was vegan, but we weren’t sure. He’s not vegan, so it wasn’t a big deal, he just isn’t mad about cheese. It’s definitely something worth asking about if you’re headed there.

Our sandwiches came in paper clamshells, which I was pleased with, since typical fast food wrapping can contain toxic chemicals. My slaw came in a plastic container, which I was less thrilled about. I thought was pretty cool that they don’t use plastic cutlery, though! My fork looked like it was made from some kind of heavy cardboard instead.

Have any of you  guys made it to VegHeads for some vegetarian drive thru action? I’d love to hear your experiences in the comments!