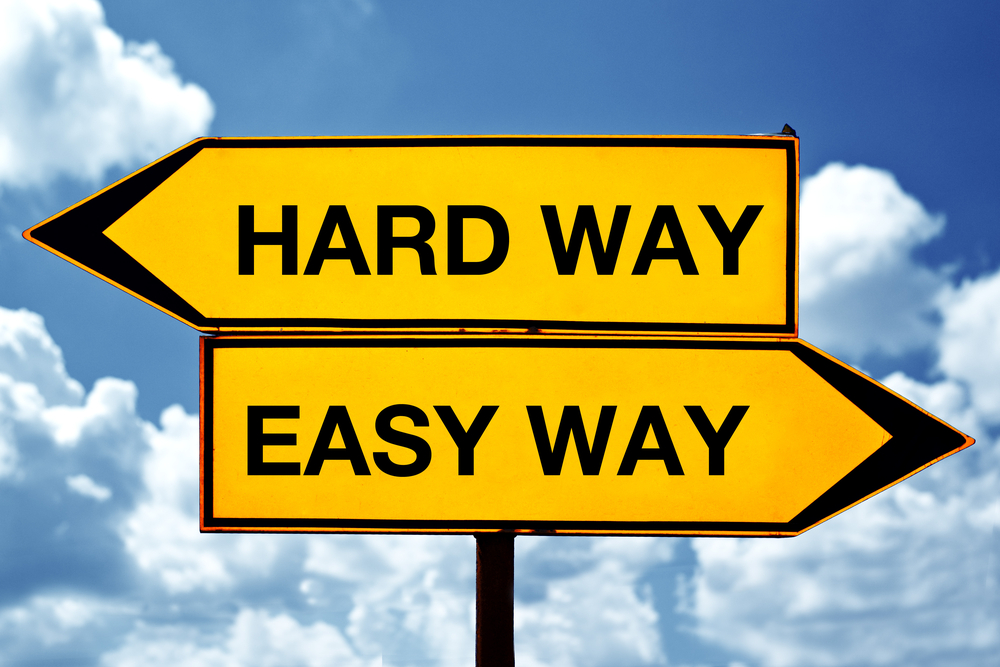 ‘I just could never do it!’ my friend said. ‘Just, gosh, the constant vigilance — I could never be vegan, it’d be way too hard for me!’ Then she told me all about the new Weight Watcher’s plan she’s on now, since the gluten-free diet failed to perform as promised. Points, lists, calories, meetings, portion measurements — all designed to counteract the chronic obesity spiking her risks for diabetes, stroke, cancer, heart disease, and early mortality resulting from standard American food habits. As I listened, I had the feeling I always have in conversations like this: seriously?! Veganism is just SO MUCH EASIER than all’a that!

I Get It: Change Sucks

Humans are creatures of habit. If you’ve eaten animals all your life, most of your favorite foods right now probably involve animal-derived ingredients. It’s scary and strange to think about ‘giving up’ those foods that you’ve enjoyed up until now. Change is scary! Right; understood.

But THAT’S the only hard part, that initial change in habits — and it’s hard no matter what kind of change you make. Going gluten-free? Hard. Embracing the Paleo fad? Hard. Starting Weight Watcher’s? Hard.

And veganism has an ethics component that adds a challenging piece to the philosophical pie — some people (my past self included) can feel defensive about the shift away from animals and towards plants. If I embrace the idea that killing animals for no other reason than my own gustatory pleasure may be ethically problematic, well, that can trigger some unpleasant reflection on past habits and make change even more uncomfortable to contemplate.

That very thing makes it so, so easy once you gather the courage to leap that initial animal-eater/ plant-eater divide! Just like my past omni-self would have been disgusted at the thought of food containing dog meat, my current self is anything BUT tempted to ‘indulge’ in foods that so often tempt my dieting omnivorous friends. It’s so very easy to avoid fast food, bacon, cheese, and other ‘temptations’ that trouble my omni coworkers — because now I don’t see ‘food animals’ and ‘other animals,’ I just see ‘animals.’

If you’d be disgusted to find yourself presented with stir-fried puppy, or grilled horse rump, or sauteed cat liver: that’s how a Big Mac (or whatever animal-derived dieter’s ‘indulgence’) looks to me. ‘Ew ew ew ew ew!’ is the response of my hungry self, not ‘oh no I must restrain myself and use tremendous will power to stick to my stupid diet.’ Unlike my omni friends, I don’t feel deprived by skipping these things! Quite the opposite: it’s the veggie wrap or guacamole or bean burrito that I WANT, it’s actually WHAT I’M HUNGRY FOR.

Because here’s the thing: taste evolves, based on food habits. Do you like anything now that you didn’t like as a kid? At 8, I hated olives and jalapenos. At (ahem, my current age) I eat both happily from the jar!

What you like is based, to a large degree, on what you typically eat. If you go ‘on a diet,’ and still see those unhealthy foods as desirable, you will still wish for those things — and any break from them will be both temporary and unsatisfying. But if you shift your food habits completely, avoiding them becomes both easy and automatic: YOU SIMPLY CRAVE OTHER THINGS.

Not only does veganism train your taste buds to crave healthier foods, but if you’re eating a mostly-whole-foods plant based diet you don’t really have to sweat your portion sizes. If you’re eating kale and carrots, for goodness sake, eat until you’re full! Unlike my dieting omni friends, I never stop eating before I’m full; I never limit portion size, or worry about calories, or count my fat grams. Everyone’s physiology is different, but for me ‘whole food plant-based diet’ is all I ever pay attention to — that’s enough by itself for me to maintain a healthy body weight as well as textbook-normal clinical health markers, such as blood pressure and cholesterol levels.

Whenever my omni friends talk about the hoops they jump through to (often unsuccessfully) manage weight or other diet-mediated health issues, it sounds so very much harder than veganism!

No Magic Bullets, But…

Healthy eating is important to me, but I’ve never considered myself ‘vegan for health reasons.’ The very best thing about veganism is that you’re guaranteed to cause less animal death and unnecessary suffering by embracing a diet without animal agriculture at its center.

Veganism won’t make you immortal or invincible, and it won’t guarantee you a perfect body forever. And yes, it’s possible to eat vegan and still eat unhealthily — Oreos are vegan, for goodness sake, and junk food is still junk food!

But if you make the initial effort to shift towards plant based habits, and inform yourself about how to do it healthfully, veganism offers lovely benefits in terms of reducing risk for a host of devastatingly common problems plaguing American adults. Based on our best knowledge to date, a well-planned whole-food plant-based diet confers reduced risk for obesity, diabetes, cancer, heart disease, and stroke. If you’re a human being of the gentleman persuasion, you may also want to read about veganism’s benes that can save you money on (and side effects from) Viagra!

Despite popular misconceptions, it’s change that’s hard — not vegan eating. I wouldn’t like to argue that veganism represents THE ONLY way to eat healthily, but to me it is absolutely and hands-down the easiest.