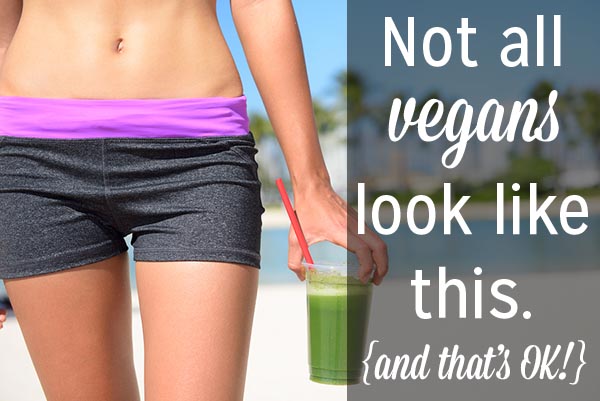 I got on the scale this afternoon. I had an inkling as to what the reading would say; my pants have been feeling a bit snug lately, and my willingness to walk 10,000 steps a day has dwindled in correlation with the number of hot summer days we’ve had around here this summer. When I stepped off the scale, I updated my goals in the MyFitnessPal app and resolved to climb out of this rut I’ve been in.

My weight goes up and down depending on the calories I consume and the energy I exert. This hasn’t changed in the nearly seven years I’ve been vegan; in fact, the only thing that has changed is the increase in tasty vegan convenience foods that make it that much easier to indulge. It’s one of the reasons that I am irked every time someone defines veganism as a diet, or blames veganism for their nutritional deficiencies. You can be a healthy vegan or a junk food vegan, or somewhere in the middle. It takes all kinds.

All kinds. That’s the thread here. Veganism, while a growing movement, is still a small one. Since being vegan is a core aspect of who we are, it’s easy to see why we are often boxed neatly into a group of stereotypes. Many people, when met with me as the vegan in the room, express surprise that I’m not a granola-eating, patchouli-wearing hippie. They quickly learn I don’t fit into that box.

And those who put vegans neatly into that box miss out. While veganism is something that makes us alike, there is so much that makes us different, and that is where we benefit. There’s no list to check off when joining this club. You can be blonde or brunette, short or tall, rich or poor, old or young. You can be a social butterfly or asocial. Your gender, your sexual orientation, your shoe size or the car you drive? None of that matters. All that matters, when you are vegan, is that you don’t use or exploit animals. Rather than “one size fits all,” it’s more like “all sizes fit one.”

Related: What is vegan clothing, and why does it matter?

If we were all the same, we’d never learn about new vegan foods, ethical arguments, or approaches to our activism. And while I’ll be the first to admit that there’s a great comfort in familiarity, there’s no growth in the same old, same old.

I may not agree with all of my fellow vegans. It’s not far-fetched to say I don’t even like some of them. And there’s nothing wrong with that. If we can coexist in this world with respect and open minds, we can benefit from one another.

Do you find yourself stereotyped into a vegan box? If so, how do you break those stereotypes? Let’s discuss!

Article republished with permission from Chic Vegan; image via Bigstock.

Author Bio: Daria Zeoli is a vegan, a cynic, and a dork. She stopped eating animals at the age of thirty and is trying to live by the motto “do as little harm as possible.” Daria lives in New Jersey with her rescue beagle, Millie. She writes about her life and other topics at dariazeoli.com.