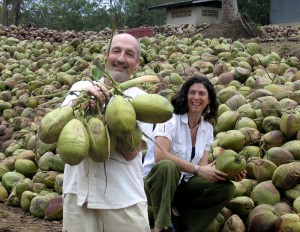 This week I tried Luna & Larry’s Coconut Bliss, another coconut-based ice cream, on a suggestion from commenter Hungry Hungry Veganos. Coconut Bliss is soy- and gluten-free, and they use some fair trade ingredients. We used to get coconut ice cream from time to time when I was growing up, so feeling a bit nostalgic, I picked up a pint of their Naked Coconut variety to try it out.

So, let’s see how it stacks up!

The Verdict
Like the Purely Decadent, this ice cream had that great, creamy ice cream texture. The Coconut Bliss Naked Coconut tasted just like the coconut ice cream that I remember eating as a kid with chewy pieces of coconut in the mix! It wasn’t overly sweet, just rich and perfectly coconut-y.

This brand does seem to have a bit more fat and saturated fat than some of the other ice creams from this challenge, but their ingredients list is pretty impressive! Not only does it have just five ingredients, they are all things that I can identify as food. One of the tricky things about vegan junk food (and any junk food, really), is that it’s often loaded with unpronounceables. The label does state:

*We use a tiny amount of guar gum (less than .35%) – which is made by grinding the fiber-rich Indian guar bean – to help maintain Coconut Bliss’s creamy texture.

That sort of transparency is really refreshing. If you have any other questions about what’s in their ice cream, Luna & Larry address several common ingredient questions in their FAQ, like where their coconut milk comes from and concerns about agave syrup.

Luna & Larry’s makes a ton of different varieties, including ice cream bars. Check out their handy store locator to find a pint!