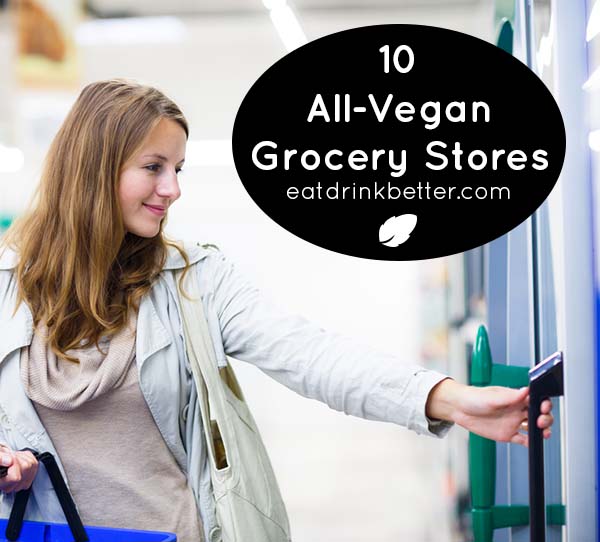 Looking for an all vegan grocery store? Even if you’re not lucky enough to have one in your town, there are lots of online options for vegan grocery shopping.

Of course, you don’t need to shop at an all vegan grocery store to find vegan food. The good ol’ grocery store has lots of vegan options. You don’t need fancy vegan specialty products to eat vegan, but sometimes it’s nice to splurge on that kind of thing.

You can even find vegan specialty items at a lot of omni stores now. Whole Foods and Trader Joes have meat analogs, vegan cheeses, fancy sauces, and other vegan goodies. But more conventional stores like Publix and Kroger are stocking vegan treats. The Kroger in my neighborhood even carries Daiya cheese now!

So, who even needs a vegan grocery store?

The joy of the vegan grocery store is that you don’t have to be so diligent about looking for hidden animal ingredients.

Non-dairy cheese, for example, sometimes contains the milk protein casein. Casein is a cheapo way to make fake cheese melt, but companies like Daiya are creating vegan cheese that melts and tastes better. At a vegan grocery store, there’s no guesswork. And taking a break from squinting at the back of the package once in a while is decadent.

The list below has some brick and mortar locations and some shops that are online-only. Happy shopping!

EDIT (6/24/2014): I encourage you guys to check out the comments on this post, too. I asked you for vegan grocery store suggestions, and you delivered! After you read my list, check out the reader additions.

1. Viva La Vegan has two brick and mortar locations: one in Santa Monica and in Cucumonga, California. You can also shop Viva La Vegan online.

2. File Veganz under “coming soon” and under “super exciting!” This is a full on vegan grocery chain that started in  Germany and is opening its first U.S. location in 2016.

3. Portland, Oregon’s Food Fight Grocery was one of the first vegan grocery stores in the U.S., and you can shop it in person or online.

4. Rabbit Food Grocery in Austin, TX is almost all online, but local customers can pick up their haul at local vegan businesses to waive any shipping fees.

5. Vegan Online is a virtual Australian vegan grocery store. They’ll ship Australia-wide, so no matter where on the continent you live, you can get vegan treats on your doorstep.

6. Vegan Perfection is another Australian vegan grocery store. If you live in Melbourne, check out their physical location!

7. Honest to Goodness is a UK-based vegan grocery store that will ship anywhere in the United Kingdom.

9. Pangea’s Vegan Store in Rockville, MD has both a physical store and an online shop.

Is there a vegan grocery store in your town that we missed? I’d love to expand this list. Add yours in the comments!