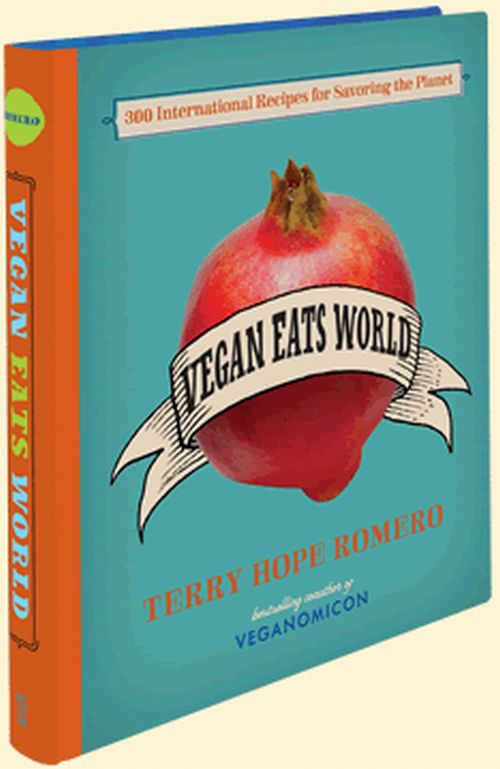 Terry Hope Romero, author of Veganomicon, Vegan Pie in the Sky, and Viva Vegan!, has written a new cookbook, Vegan Eats World, containing “three hundred international recipes for savoring the planet”. Her latest cookbook was inspired, as she says, by the diversity of her own neighborhood of Queens, New York.

The introduction covers many ingredients, such as wonton wrappers or gochuchang, describes them and how to find them in stores and vegan. It also includes a quick round-up of cooking terms and short instructions for each.  The rest of the book is organized by types of dishes, with each chapter containing dishes inspired by a variety of cultures from around the world.

The Three Protein Amigos: Tofu, Seitan, and Tempeh – Lots of ideas for these protein staples in this chapter, including a recipe for homemade seitan.

Salads, Spreads, and Sandwiches – Creative salads accompanied by sandwiches or tacos and other tasty meals.

Dumplings, Breads, and Pancakes – The chapter starts with a basic dumpling dough and expands from there to watercress coconut lumpia rolls, sweet potato-stuffed paratha, and yogurt naan griddle bread. Bakers will love this chapter for the sheer number of possibilities Romero brings to the book.

Asian Noodles to Mediterranean Pasta – Curry noodle soup with oyster mushrooms (plus an extra-creamy version), sizzling seitan pho noodle soup, and pad see ew are just a few of the pasta ideas in this chapter.

Hearty Entrees – From burgers to eggplant parmigiana, the entrees provide a solid centerpiece to meals.

Robust Vegetable Entrees – If the previous chapter didn’t have enough, this one has even more entrees, such as roasted eggplant masala, crispy plantains with East meets West chocolate mole dip, and lemon garlic potatoes.

The last few chapters have menus, online resources, and recipes grouped by low-fat, gluten-free, suitable for beginners, and so forth.