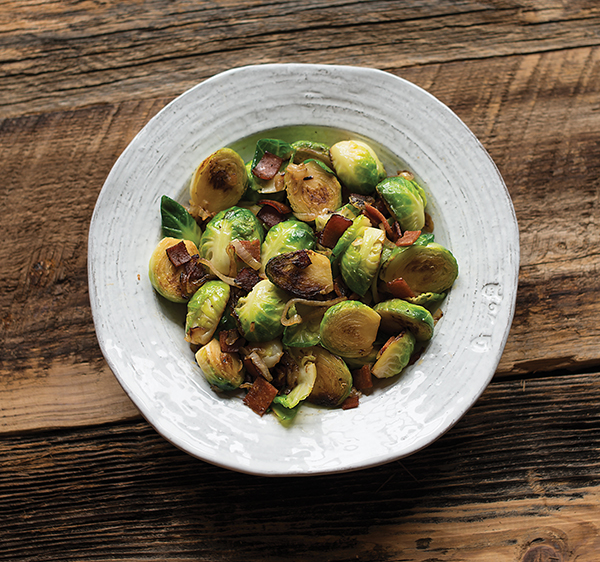 Vegans love bacon, too! Read an interview with Baconish author, Leinana Two Moons, and grab the vegan Brussels sprouts with bacon recipe from the book.

Leinana Two Moons is the author of the blog Vegan Good Things. Her writing and photography have appeared in LAIKA and VegNews magazines. A longtime vegan, she is dedicated to creating recipes that are satisfying enough to please anyone, vegan, vegetarian, flexitarian, or hardcore carnivore alike. She is active in the NYC vegan community and lives in Long Island City, NY with her husband and two children, who are all vegan. Baconish is her first cookbook.

Leinana Two Moons: For me, it was definitely a gradual transition. I married a vegan guy, and we ate vegan at home, mostly for convenience so that I wouldn’t have to cook different meals. If we went out to eat, I would still order seafood, eggs, and dairy for a couple of years after we were married, but I found that I was always more interested in whatever my husband ordered. Gradually, and without really planning to, I cut more and more animal products out of my diet, and at some point I noticed how much better I was feeling. Health issues I’d had my whole entire life were disappearing. And then one night, after watching the movie Earthlings, I gave up all animal products and declared myself vegan from that point on. CV: When people learn that you are vegan, what is the #1 question they ask and what is your response?

LTM: Surprisingly, it’s not, “Where do you get your protein?” The question I probably get the most is, “Isn’t it hard?” Well, I have to admit, living in NYC, we’re very spoiled with a wealth of vegan restaurants to choose from, and vegan ingredients are widely available even in local grocery stores, and so it’s actually pretty easy to be vegan here. I have traveled to other parts of the country were it was certainly a lot more challenging to find places to eat. But non-vegan people really tend to over-think how complicated vegan food needs to be. I mean, we’ve all eaten an apple! That’s a vegan snack! We’ve all had pasta with marinara sauce, also vegan! I think people think it’s all weird stuff that they don’t know how to pronounce, like seitan and quinoa.

CV: Your children are vegan. What are the challenges you’ve come across in raising vegan kids?

LTM: I’ll be honest, it does take more planning and work raising vegan kids. You have to communicate with their school to make sure the teachers and staff know not to give them any food with animal products. I pack my son’s lunch every day, and it would certainly be easier to just send him off to school and let him eat whatever they are serving, for free, at lunchtime. And then there are the birthday parties. We are lucky enough to have a wide circle of vegan friends with children close to the same age as ours, and it is amazing when you can go to a birthday party and not have to worry about any of the snacks or the birthday cake. And we’ve also been lucky to have some very thoughtful non-vegan friends, who have provided a vegan cupcake or other treat as an alternative to the main birthday cake. But of course there are other parties where you have to plan ahead and bring your own snacks and treats so they will have something to eat, or you bring a dish to share with everyone.

CV: Tell me a little bit about your new book Baconish and what inspired you to write it.
LTM: Baconish has recipes for several different types of vegan bacon, using ingredients like tofu, tempeh, seitan, mushrooms, coconut, eggplant, carrots, and even chickpeas. And then it also includes a lot of recipes in which to use those vegan bacons, everything from BBQ Bacon Cheeseburgers to Bacon-Topped Veggie Loaf to even Elvis Cupcakes (Banana Cake with Peanut Butter Frosting) topped with Coconut Bacon.

Several years ago on a trip to Montreal, my husband and I ate at an amazing vegan place called Aux Vivres. It was there that I first tried coconut bacon and I immediately became obsessed with it. I posted a recipe on my blog, and everyone went crazy over it. I started seeing all kinds of vegan bacon popping up on blogs, everything from the usual tempeh bacons to the more unusual ones, like carrot bacon. I started thinking how fun it would be to have one book that compiled all these different vegan bacon recipes, but then I also started thinking about this larger bacon mania all around us, and how often I’ve heard people say, “I could never go vegan because of bacon.” I started thinking about how a book like this could show people that you can still enjoy all those delicious smoky, savory, baconish flavors, without destroying your health and without any harm to pigs or other animals.

CV: Do you have any favorite recipes in the book?
LTM: So many! I can’t help but love the Coconut Bacon BLT, as that was really the recipe that started this whole book. I also especially love the Quiche Lorraine, Smoky Split Pea Soup, Tofu Bacon Carbonara, and the Pineapple-Glazed Seitan Ham. That last one’s not bacon, but it’s one of a few bonus pig-friendly recipes that I included.

CV: What inspires you to create a new recipe?

LTM: Hunger! A lot of my inspiration is based on memory, from travels, from family recipes, from something I ate somewhere that was memorable, and I will want to “veganize” and recreate that. I’m also completely addicted to food magazines, cookbooks, and food shows on TV, they all give me many ideas for dishes to veganize and make on my own.

CV: What advice would you give to aspiring cookbook authors?

LTM: My advice would be to be extremely organized, to make a production schedule for yourself and stick to it, and to make sure that you are really committed to seeing the project through, because cookbooks are very much a labor of love. And to have hungry family, friends, and neighbors who will help you eat all the leftovers you will have from all your test recipes! And, as much as I loved writing Baconish, I would probably advise against writing a cookbook focused on one main ingredient. By the end, you will be very, very tired of that ingredient!

LTM: It would have to be doughnuts from Dunwell Doughnuts. I have no will power when faced with their Peanut Butter and Jelly doughnut. And soy chai lattes.

LTM: Unsweetened vanilla almond milk. My kids drink so much of it, we should have it on tap.

CV: In your wildest dreams what will your life look like in 5 years?

LTM: In my wildest dreams, I will be hosting a vegan food show on TV, and it will require traveling to lots of great places just to eat all their delicious vegan food. Oh, and my kids will LOVE eating ALL of their vegetables. Shallots and vegan bacon are caramelized with a bit of brown sugar to add just a touch of sweetness to the earthiness of the Brussels sprouts in this recipe. I prefer my Brussels on the crisp-crunchy side, but feel free to cook them longer if you like them more well done. (From Baconish © 2016 by Leinana Two Moons. Used with permission from Vegan Heritage Press.)

Dianne Wenz is the Editor-In-Chief for Chic Vegan. She is a Holistic Health Counselor, Vegan Lifestyle Coach and Plant-Based Nutrition Specialist. Dianne coaches people from across the country to help them improve their health and wellbeing, and she helps people make the dietary and lifestyle changes needed to go vegan. Dianne lives in New Jersey, where she runs the busy MeetUp group Montclair Vegans. Through the group she hosts monthly potlucks, runs charity bake sales and organizers guest speaker events. An avid cook and baker, Dianne also teaches cooking classes to local clients. In addition to food and nutrition, Dianne loves crafts and cats. To learn more, visit Dianne’s website and blog at VeggieGirl.com
Twitter – Facebook