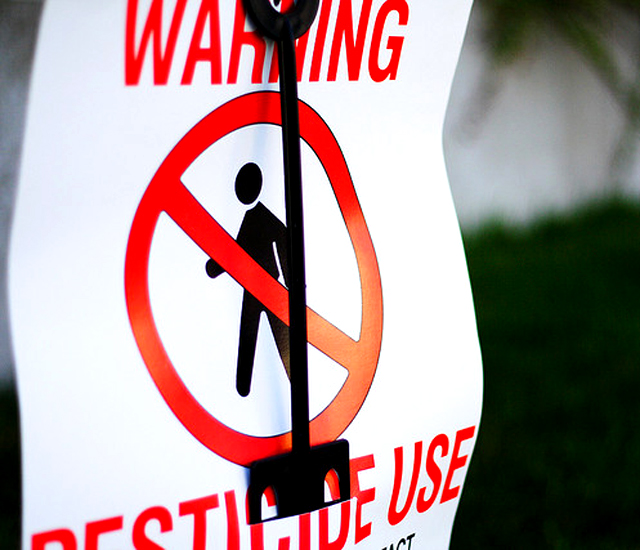 Monsanto’s Roundup Ready seeds caused widespread emergence of Roundup resistant ‘superweeds.’ Now Monsanto and Dow want to market GM seeds resistant to both Roundup and Agent Orange ingredient 2,4-D. If approved, such crops would guarantee increased soaking of food crops with twice as much poison, along with even more stubborn pesticide-resistant weeds.

Earlier this year, EDB brought you news of the Brave New Plan to deal with superweeds — by escalating the Foolish Old Plan that caused them in the first place:

What’s actually happened — unshockingly, to anyone familiar with basic principles of biology or natural selection — is that weeds have evolved to adapt to their Roundup-drenched environment, and have developed independently what Monsanto spent years and billions on inventing and marketing: Roundup resistance…

Developed in the 1940′s, 2,4-D has been shown to double the incidence of birth defects in children of pesticide applicators. It is  suspected to increase incidence of non-Hodgkins lymphoma. 2,4-D is also reported to negatively effect endocrine and immune function, and to impair respiratory and central nervous system function. According to one toxicity summary, at high levels of exposure 2,4-D acts as a central nervous system depressant that can cause severe health problems…

Isn’t it great?! Now growers will be able douse vast fields of the same crop with the same TWO very toxic herbicides over and over every season, instead of just unlimited amounts of ONE very toxic herbicide over and over every season. Certainly this practice would never everever result in multi-resistant weeds, which would then require even MORE genetic tinkering and MORE poisons on food crops, escalating indefinitely with unlimited potential for negative health and environmental impacts.

The USDA later announced plans to hasten the approval of stacked resistance GE crops resistant to both glyphosate (Roundup) and 2,4-D, despite strong concerns from science groups about the harmful health and environmental impacts of such a strategy.

The USDA is now deciding whether to approve an application by Dow Chemical Co. for its genetically engineered 2,4-D corn. If approved, it would exponentially increase the use of Agent Orange ingredient 2,4-D on food crops, as well as clear the way for stacked-resistance GE seed approval.

According to Andrew Kimbrell, Executive Director of the Center for Food Safety,

The stakes couldn’t be higher. Dow’s 2,4-D corn, soon to be followed by 2,4-D soybeans and cotton, are the first of many new GE crops designed to launch American agriculture into a new era of increased dependence on more toxic pesticides, reversing decades of progress. Two-thirds of GE crops awaiting approval by USDA are resistant to one to three herbicides each, with many more in the longer-term pipeline. For instance, Monsanto has developed crops resistant to dicamba, a close chemical cousin to 2,4-D.

According to agricultural expert Dr. Charles Benbrook, 2,4-D corn will trigger an astounding 30-fold increase in 2,4-D use on corn by the end of the decade, assuming widespread planting. 2,4-D soybeans and cotton will boost usage still more. Yet USDA has provided no analysis of the serious harm to human health, the environment or neighboring farms that will result.

The USDA is accepting public comment on this very bad idea through Friday, April 27.

So far, the USDA has catered to the biotechnology industry like a giddy schoolgirl on her first date with a handsome thug. But there’s a growing US consumer demand for sustainable agriculture, food industry transparency, and USDA accountability. Maybe this time they’ll listen.

This is a great opportunity for the USDA to climb off the biotechnology industry’s lap, stop batting its eyelashes, refasten its top button, and actually do its job — by protecting consumers from a product that will make things worse instead of better.