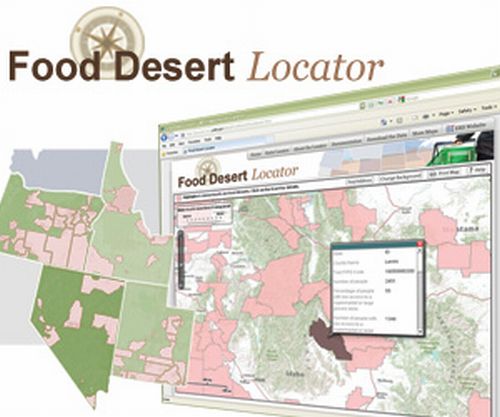 The USDA introduced their Food Desert Locator, an online mapping tool, this week. The definition of a food desert is an area where residents have little to no access to fresh, nutritious foods.

The Food Desert Locator came about because of Michelle Obama’s Let’s Move! initiative. In an effort to curb childhood obesity and increase the health of low-income families across the United States, the Healthy Food Financing Initiative (HFFI) was formed.

The HFFI is a collaborative project between the Treasury Department, Health Human Services, and the USDA.

The HFFI is intended to enable grocery stores, small retailers, corner stores, and other sellers of food to offer fresh, healthy food.

Where are Food Deserts?

The first step in getting fresh foods to food deserts is knowing where they are. The Economic Research Service (ERS), a division of the USDA, put together a report which designated areas of limited access to a food source.

The food sources they considered were large grocery stores and supermarkets. Anyone living more than one mile from a food source is considered as having limited access. In rural areas, the distance is increased to ten miles.

The places where low-income communities overlap with limited access to a food source are food deserts. Food deserts show up as pink on the map.

They even note that 17 housing units have no car and low access. Those are families who live far away from the food and can’t even drive there.

What Can You Do With the Food Desert Locator?

What practical purpose can this serve? It gives us a very clear indication of where the food deserts are and exactly how many people need access to food. Community planners can use it to help decide where to create tax incentives for Wal-Marts and other grocery stores to build.

Since most food deserts are urban, farmers and market gardeners can use the Food Desert Locator to find untapped markets for their fresh fruits and vegetables.